AvPGalaxy – How long, from start to finish, did it take for your team to complete a map like Tribute?  This map is absolutely mind-blowing!

Dave Flamburis: I think we got to first-playable in about a month. That means you can start and finish the mode but the final lighting, propping, optimization, fine-tuning, etc. aren’t evident yet. After that, it’s common to do a series of iteration rounds.

I work on multiple maps at the same time, so at some point I was probably letting design get in there and iterate while I was doing a polish pass on the Sephora map or the Derelict map (Mercenary). I’ll circle back when design can swap maps and I’ll spend a lot of time nudging and polishing or adding collision. From soup-to-nuts? I’d say about 3 months. We did a lot of our own bug testing and, of course, fixing. Bug-fixing and optimization for console, especially PS3, really eats up a lot of time.

In that 3 months, though, we definitely were getting hand’s-on with all 3 Bug Hunt maps. We multi-tasked very well. There was a great flow.

Dave Flamburis: Yes, you can accomplish a tremendous amount of work when you are given the freedom we were given.  It’s really a labor of love, you know? No one’s kicking me out of the office at 5 and everyone knew this was a dream project for me. I really couldn’t call it work.

AvPGalaxy – What type of source material did you and your team reference in order to recreate the iconic locations from the films? Did you all review the blu-rays for reference ad nauseam or were you given access to production materials from the studio?

Dave Flamburis: I had access to some pretty cool archival material.  A lot of it wasn’t pertinent, but it was nice to be able to surround yourself with so much inspiration. A lot of the set builders were clearly proud of their work, and it shows.

A lot of times, I’d find myself inadvertently leaning around trying to peek over someone’s shoulder in the photos, and I’m trying to look past them at some little detail. I used to do a lot of racing games visa-vie Papyrus Racing Games. My franchise was NASCAR and I visited a lot of the tracks and did my own reference gathering in the field, so I’m always looking for both the big picture and the small nuances.

AvPGalaxy – What other iconic locations from the alien franchise were you interested in working on and turning into Bug Hunt maps? And were you and your colleagues allowed to attempt any Prometheus locations, such as the pyramid, Juggernaut craft, or general landscape of LV-223?

Dave Flamburis: Oh my God… you nailed it. I’ve been a fan of HR Giger since I was 15. I have the original NECRONOMICON, I’ve been to the Morpheus Gallery on Rodeo Drive and looked at his work in person. I almost spend 1500 bucks on a page from his sketchbook, but my wife was gonna kill me.

I had no knowledge of any PROMETHEUS talk during my time on the game. In fact, I really tried to stay away from PROMETHEUS as much as possible because I didn’t want it to taint the ALIENS vibe I was feeling. It’s impossible to “unsee” something. But I’m such a fan of Giger’s work and seeing his paintings of the ‘Life Cycle’ were terrifying and inspiring at the same time.

AvPGalaxy – He’s quite the artist! I’d love to own an original piece!

Dave Flamburis: I love how Ridley Scott and Giger work together. One understands the other very well, and I think Scott really protected Giger’s veracity and artistic individuality and that Giger, I am certain, trusted Scott with PROMETHEUS.

These are real cerebral and emotional artists. They’re two-halves of the same coin, too, in my opinion. 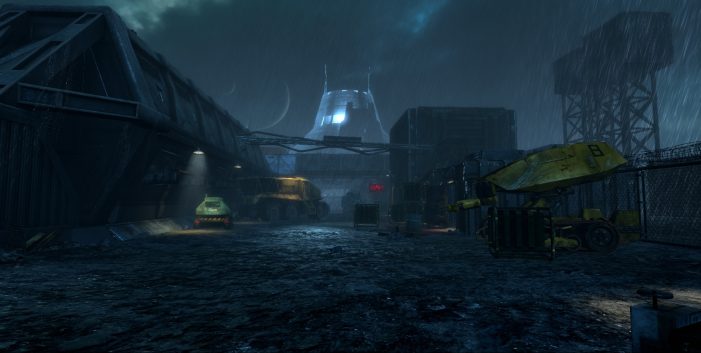 AvPGalaxy – How difficult would it have been to convert the existing Escape maps, such as “Emergency Evac” and “Flushed Out,” to full-blown Bug Hunt maps? Fans have long been requesting this type of Bug Hunt-Escape combination.

Dave Flamburis: I can’t speak for anyone on this, but a map’s just a bunch of data. Anything can be stripped clean and re-fitted. Unreal Tech is flexible.

Here’s something interesting. The checkpoints in ESCAPE represented another moment of serendipity for our work on A:CM, we couldn’t fit an MP map into our budget if we went over a certain size but we really wanted to push the idea of pursuit and have these really long linear maps.

I pushed for the idea of level streaming and checkpoints, thinking it’s a win scenario for everyone. Initially I think folks thought I was nuts but I think sometimes you have to toss assumed standards aside and do what you can to support the vision. Engineering concurred, so we went with level streaming in an MP mode.

In the end, the checkpoints became goals and it “just worked”. Also, originally, there was this great bolt lightning effect happening in the exterior of Emergency Evac. The “no-man’s land” was really eerie with the jarring directional effects and sounds of thunder. Real unsettling vibe. Not heroic by any means, which is what I was going for. I don’t know what happened to them. If someone does make a Bug Hunt mode out of Emergency Evac, please put the lightning back.

AvPGalaxy – What are your thoughts on implementing boss fights into Bug Hunt? For example, having either multiple crushers, boilers or an alien Queen (where space allows) during wave 30?