Gearbox Software, creators of the well received Borderlands and developers of the upcoming Aliens: Colonial Marines videogame for next-gen consoles and PC, due for release in 2012, join us in a interview about the upcoming Alien title. This interview was made possible after giving the community the chance to submit their own questions. We then selected the most popular questions to ask in our interview.

A very special thanks to Sega and Gearbox Software for answering our questions as well as the community for getting involved.

AvPGalaxy – Thank you for taking the time to answer our questions and the questions of the community. First off, can you give us a brief update on the game’s status? How much has it evolved since the E3 demo?

Gearbox Software – We have made significant progress on Aliens: Colonial Marines since E3 2011. The fundamentals are now much more fleshed out, as are the environments, weapons, and so forth. The overall design of the game has naturally evolved as the various aspects of the game have become more concrete, resulting in a much more polished and cohesive experience than before. There’s still a lot of work to be done, but we can see the light at the end of the tunnel.

AvPGalaxy –  Gearbox‘s CEO, Randy Pitchford, has mentioned that several members from Gearbox had the opportunity to read the script and check out production on Prometheus. Has this influenced or limited the game in any aspect, especially considering you get to visit the Derelict in Colonial Marines?

Gearbox Software – One of the major goals we had in mind when we first started talking about Aliens: Colonial Marines was to offer a deeper insight into the mythology of the Aliens universe and answer some of the unresolved questions there. That’s something we’re very excited about, and a lot of that stems from discussions the team had with Ridley Scott. As I’m sure you can imagine, we’re also very excited about the possibility of Prometheus offering additional insight and answers as well.

AvPGalaxy – From what we have seen so far in the E3 demo, the game seems to rely on timed events and linear progression. Will the final version allow free-roaming levels ala Borderlands, or will it be a cinematic, linear experience?

Gearbox Software – What’s been shown of the campaign thus far represents a very small part of the overall game. With what we showed at E3 2011, the intent was to highlight as many different aspects of the campaign as possible within the allotted time: atmosphere and tension, gameplay, co-op, sentry guns, etc.

While that demonstration was comprised of things that are in the game, the campaign is a bit more nuanced in terms of pacing. Relative to the open spaces of Borderlands, the environments of Aliens: Colonial Marines are more guided, but there’s a lot of room for choice both in the ways that players can approach an encounter as well as that path their specific character takes.

AvPGalaxy – Another aspect shown in the E3 demo are the sentry guns. How is Gearbox approaching this iconic weapon? Can sentry guns be placed in any part of the environment or are there designated drop points as we saw in the demo?

Gearbox Software – A sentry gun can be placed anywhere you’d like, so long as there’s one available. They’re also an extremely limited commodity, so you’ll want to approach their placement strategically. Especially since Xenomorphs are crafty buggers that like to emerge from unexpected places.

AvPGalaxy – One of the most interesting aspects shown at E3 was the co-op. When a player drops into the game do they take the place of one of the main story characters or rather their custom characters?

Gearbox Software – When a co-op player drops in, they take control of a freshly-spawned character that retains all of the perks and upgrades they’ve unlocked. This is done primarily because each of the main characters has their own distinct role in both story and gameplay. 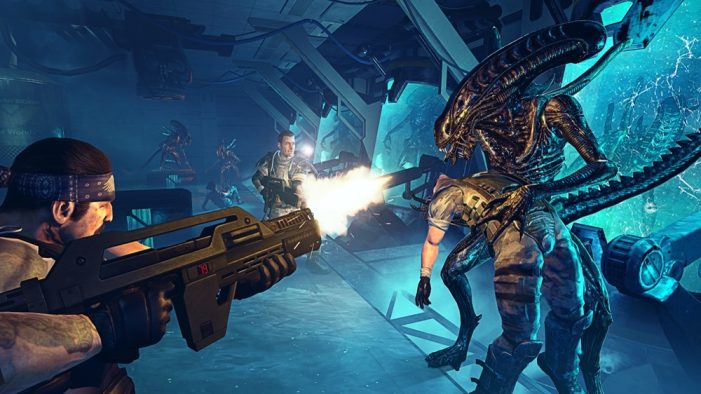 AvPGalaxy – How are Gearbox going to ensure we keep picking up the controller to replay Colonial Marines? What sort of re-playability does the game have?

Gearbox Software – We want to make sure the game is engaging and has lots of replay value to it, so we’re experimenting with a variety of approaches to create more long-term engagement than typically seen in a first-person shooter. The upgrades and perks you choose to unlock across the campaign, cooperative and competitive modes are a major part of this and something that we’ll be talking much more about later on.

AvPGalaxy – We‘ve got PAX East around the corner. Are there any plans to be showing off Colonial Marines at any of these future gaming conventions?

Gearbox Software – Yes, Aliens: Colonial Marines will be at PAX East in the SEGA Booth where attendees will be able to face off against the developers in competitive multiplayer! In addition, Gearbox will be talking about the game during its PAX East panel on Sunday, April 8th at 4:30pm in Manticore Theatre. We’ll be doing what we can to share updates and details with those who aren’t able to attend, but if you’re able to make it, you really don’t want to miss either.

Thanks for taking the time to talk to us. We look forward to learning more about Aliens: Colonial Marines very soon.