Predator is one of those great action films that was released at the end of the 80s and it was around the time Arnold Schwarzenegger’s career took off as an actor. In my opinion, it’s one of Arnie’s best action films aside from the Terminator series.

The story starts off when Dutch Schaefer and a team of commandoes are recruited by the CIA to rescue some hostages who are help by guerrilla fighters in a South American country. After been dropped off by helicopters in the jungle, Dutch makes some discoveries along the way which suggest that they were misled by their government as to why they are here in the jungle. They soon discover the enemy camp and destroy the guerrilla fighters. Unknown to the team of commandos, someone or something is following them in the jungle. 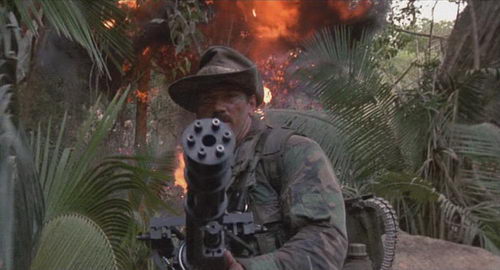 Predator is directed by John McTiernan who had only done one other movie when he directed this one. He did go on to direct “Die Hard” and “Die Hard 3” after Predator. The movie starts off pretty slowly but soon picks up the pace and it’s pretty much non stop action until all the team are picked off one by one. There’s some terrific shots too and well-handled fight scenes. The film also has some great effects that still hold up well today. The invisibility cloak for example looks great as well as the creature POV shots. These sorts of things really immerse you in the film.

The premise of the film is simple to understand. A team armed with high-powered weaponry is sent in to rescue a cabinet minister and quickly find they’re being hunted by some invisible creature. The film never tries to go more in depth than that. There’s also very little characterisation but that’s not really important in Predator. The location of the film is just perfect. Set in a jungle where it’s claustrophobic. It’s also the reason why no other Predator sequel can come close to replicating the tension in this picture. 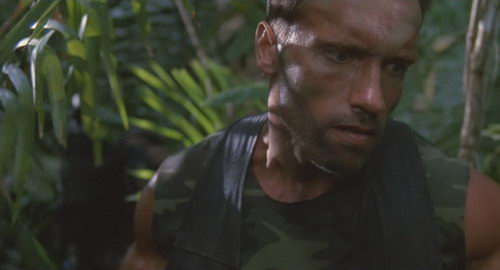 Predator isn’t well known for its acting of course but you get what you expect. In the film we have Arnold Schwarzenegger playing Dutch, the leader of the team. Other members of the team are Mac (Bill Duke), Blain (Jesse Ventura), Billy (Sonny Landham), Poncho (Richard Chaves), Hawkins (Shane Black), CIA agent Dillon (Carl Weathers) and a prisoner called Anna (Elpidia Carrillo). One of the main attractions of the film is Arnie. I mean if he wasn’t in this, I don’t think it would have been half as successful as it was or well-known.

The creature itself was made by Stan Winston and it looks very realistic. He really out-did himself with this creature. So many creature films fall into the trap of using CGI or poor costumes. Usually the audience can tell that it’s a man in a suit but in Predator, it really does look like an alien hunter. Also, compare the Predator in this film to the ones seen in Alien vs Predator and there’s really no contest. The creature itself has an assortment of different weapons and equipment such as the shoulder cannon and wristblades which all add to the background of the creature. That it’s actually a hunter from another planet. 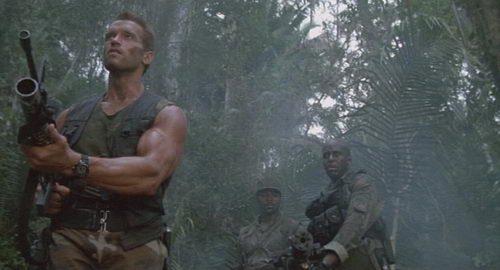 Predator is also very gory. There’s skinned bodies, arms being torn off, people getting stabbed. It’s possibly the goriest film out of all the Alien and Predator films. If you like this sort of stuff, then Predator will be exactly what you’re looking for.

I think Predator is truly a great action film. Anyone watching the film now, could probably not tell that it was made in 1987 and the special effects still look good now as they did when it was released in cinemas. Highly recommended.