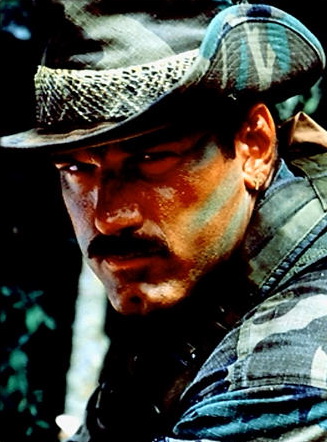 Sergeant Blain Cooper was a soldier and part a team of commandos. In 1987, the U.S. military and the CIA hired Dutch and his team for a rescue mission in the jungles of South America. Dutch’s team encounters a Predator who stalks them in the jungle. Blain was the second member of Dutch’s team to meet his demise at the hands of a Predator. Blain appears in 1987’s Predator, played by Jesse Ventura and is best known for carrying a Minigun weapon known as ‘Old Painless’.

Mac and Blain served together during the Vietnam War and saw action in Cambodia. At one point, his squad was ambushed leaving only Blain and Mac as the only survivors.

In 1980, they both joined Dutch’s private military team and in the subsequent years, saw action in Angola, Cambodia, Lebanon and Afghanistan. They recently ended a terrorist siege at the Sudanese Embassy in Berlin, Germany.

Dutch’s team soon discovers the wreckage of a crashed helicopter that had been carrying the cabinet ministers. Three skinned bodies hanging in the trees were also found which Dutch realised were Green Berets out of Fort Bragg from their dog tags. Blain takes out his Minigun weapon ‘Old Painless’ in preparation for the battle ahead. The squad pressed on to the guerrilla camp where a number of hostages were being held. The team launched their assault on the camp, killing almost everybody except a woman called Anna who is taken prisoner. 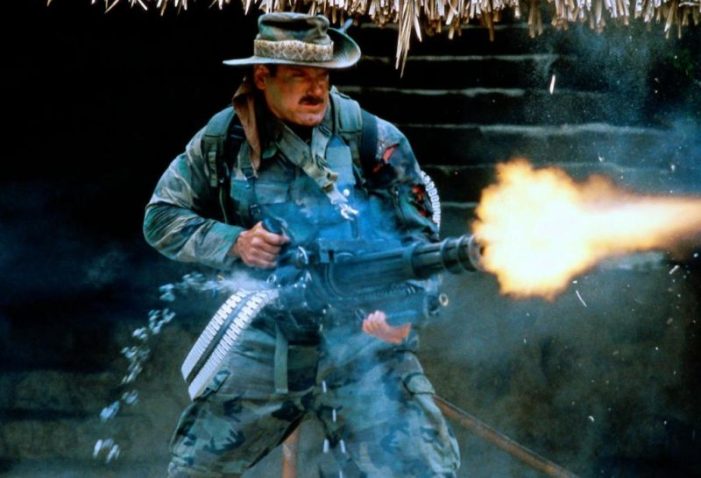 Dutch and his squad make their way to the extraction point unaware they are being tracked by an unidentified creature. Anna attempts to escape who is caught by Hawkins. The creature spares Anna but kills Hawkins and drags his body away. Dutch organises a search to find Hawkins’ body. During the search, Blain is hit with a projectile, and then the Predator fires his shoulder cannon burning a hole straight through Blain’s chest. Mac picks up Blain’s minigun and fires it into the jungle.

The team set up camp for the night and put traps all around to prevent anything from getting in. Mac was mourning the loss of his friend and placed a flask on his body. A wild pig inadvertently enters the camps setting the traps off. In the mayhem, the team discover Blain’s body has been taken by the Predator and Dutch realises the enemy is using the trees to get around.

Blain was tobacco-chewing, arrogant member of Dutch’s team, believing he was unstoppable with his signature Minigun weapon. He was very suspicious of Dillon from the outset. During the attack on the guerrilla camp, he was hit in the arm and continued on saying “I ain’t got time to bleed.” 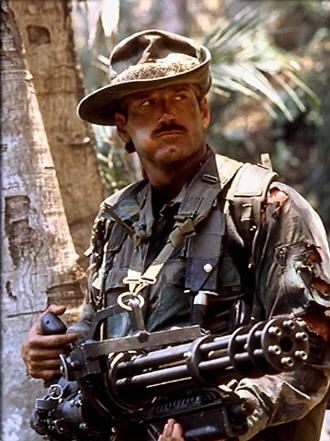 The weapon that Blain is using is a M134 Minigun. This is a weapon most commonly mounted on the side of a helicopter and it really wouldn’t be possible to carry and operate by a single person. Many modifications had to be made to make it usable in the film. It was powered via an electrical cable hidden down the front of Blain’s trousers. The firing rate was slowed down to approximately 1/3rd the normal rate of fire, both to reduce consumption of blanks, and to make the spinning of the barrels visible on film.

It was rumoured that Jesse Ventura wore a bulletproof vest to protect him from the spent cartridges but this was incorrect. Unmodified miniguns eject cases out of the bottom, with the cases essentially falling out due to the force of gravity. Even due to the modifications, it was still a very heavy weapon and really only men with bodybuilding backgrounds would be able to lift it.