The first one is entitled “Traeger Meets McKenna” and takes place just after McKenna enters the bar and tells the barman to post the Predator equipment. Traeger meets McKenna for the first time and tells him they’re going to take him to a remote prison.

The next deleted scene is “Lynch Goes Shopping” which takes place when the Loonies get to the apartment. Lynch is outside and tells a biker to stop revving his engine. The biker makes a remark and Lynch punches him. McKenna gets a cup of coffee while Lynch shows off some card tricks to a girl. Lynch then asks a trucker to see what weapons he has for sale in his truck.

The last deleted scene on the Blu-Ray is “Surveying The House” where McKenna’s wife is painting. The Loonies are outside the house surveying the property. The scene continues off from the theatrical where Traeger visits the house. McKenna is still outside listening to the conversation.

The Predator Other Deleted Scenes

In test screenings during November 2017 and June 2018 the film opens with a block of text that essentially summaries the events of the first Predator and Predator 2 and also establishes that Project: Stargazer was founded to track the Predator activities on Earth.

For the June 18 test had an addition that explains that a top university in the early ‘80s was given a grant to study linguistics (like also mentioned in the finished film), which would later be used to translate a language intercepted from space by the Hubble telescope. The language could not be fully deciphered but they were able to decipher over 50 variations of the word “kill.” Just prior to the events of the film they had managed to translate the following within the transmission: “Traitor. Yautja. KILL.”

In some of the trailers we see footage of the Ark crashing that doesn’t appear in the films. The footage appears to depict the Ark crashing in the swamps of Georgia, rather than the quarry where it was ultimately found in the finished cut.

On the day of The Predator’s premiere in Toronto, news was released that 20th Century Fox had ordered the removal of a short scene from the beginning of the movie in which Olivia Munn’s Casey Bracket was hit on by a jogger played by Steven Wilder Striegel due to the discovery that he was a convicted and registered sex offender.

The scene was a short one in which Striegel’s character, Doug Amaturo, met Brackett at a dog park and tried to engage her in conversation about their dogs. The scene establishes Brackett’s knowledge of evolution and biology and when Amatauro tries to hit on her, she quickly establishes herself as a badass with an attitude before Amaturo runs off. The scene then moves into Brackett being approached by Stargazer agents. 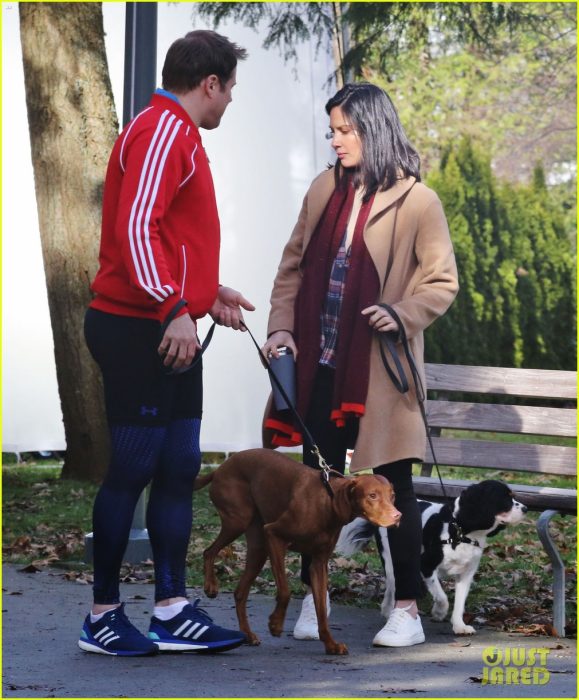 The very first teaser trailer opened with some trick editing where it looked like Rory was controlling a Predator ship with the device that is ejected from the Predator gauntlet (known in the script as the kujhad). The scene from the trailer where he was just playing with the device wasn’t in the film.

Just as the decontamination process finished, Sean Keyes has a moment where he pretends to be electrocuted, scaring Casey.

While in the basement but before Rory opens the box containing the Predator equipment, he has flashbacks to being younger when Quinn and Emily are fighting. In the script Rory is a baby but in the test screening it was a younger Rory still portrayed by Jacob Tremblay. Quinn is upset that Rory is nothing like him and punches a hole in the kitchen wall in frustration.

Just prior to Casey realizing the Fugitive Predator’s mask and gauntlet was missing, there was a brief moment where Casey saw is looking through pictures of the previous Predator movies. She sees a picture of Peter Keyes and comments on the resemblance between Peter Keyes and Sean Keyes, confirming that they were related.

Do You Know What My Job Description Is? (Source: Trailer, TV Spots, Test Screening)

This extended scene took place during Traeger’s interrogation of Brackett when her and the Loonie’s are held captive in the barn. Seen in the various trailers, the deleted dialogue included Traeger asking Brackett if she knew what his job description was. “I’m in acquisitions. I look up and I catch what falls out of the sky.” She asks him what was in the crashed Predator ship. Later in the full trailer Traeger says “I think you know what is on the ship.” The editing in some of the marketing makes it sound like Traeger responds “the Ultimate Predator” to Brackett’s question.

So Come and Get Us Motherfucker (Source: Trailer, Test Screening)

Following the end fight sequence with the Upgrade Predator, this would have been the final shot in the film in which McKenna looks up at the sky and says “so come and get us motherfucker.”

It was widely reported that the reshoots that took place drastically altered the end of the film. We’ve seen quite a bit of evidence of that original third act in various trailers and set photos.  How much of what was ultimately filmed is accurate to the leaked script is unknown but here is what we’ve seen in the marketing.

In the finished film, the ship the Fugitive crashed in contains a “gift” for humanity, the Predator Killer suit. Originally, the ship was known as the Ark and contained cryotubes that held various hybrid creatures which were known on-set as the Menagerie. The Fugitive Predator had stolen the Ark so that the Upgrade Predator couldn’t use them against humanity. These creatures were genetically engineered and shared some basic traits with the Predator – in particular the skull and mandibles. 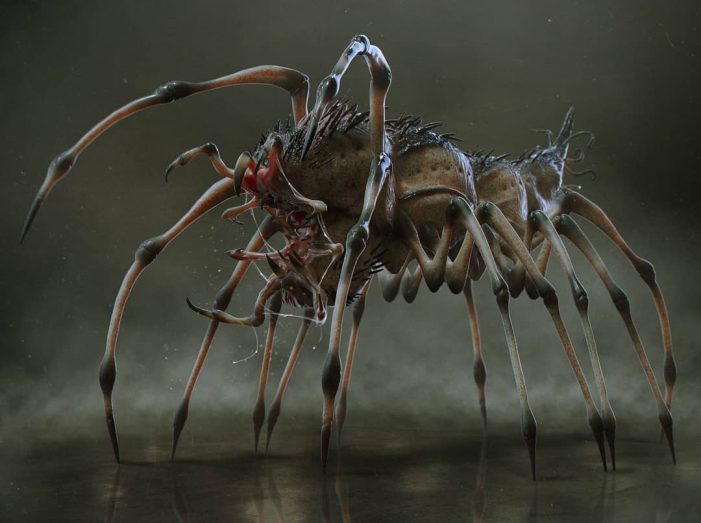 The script specifically makes mention of a spider/Predator hybrid. The November test screening the unfinished VFX work featuring the hybrids such as Gekko Predator, Harpee Predator, Bull Predator and Preda-pede. The hybrids – including the dogs – also wear self destruct collars, which in the script is the explosive used at the end of the film against the Upgrade Predator.

These creatures would be set loose and the Loonies and Emissary Predators would have to fight them.  They were reportedly featured in the test screenings. You can also see evidence of them – their body parts – in the below set picture which also shows an injured/dead Coyle. In the script he was killed by one of the Emissary Predators for getting in its way. 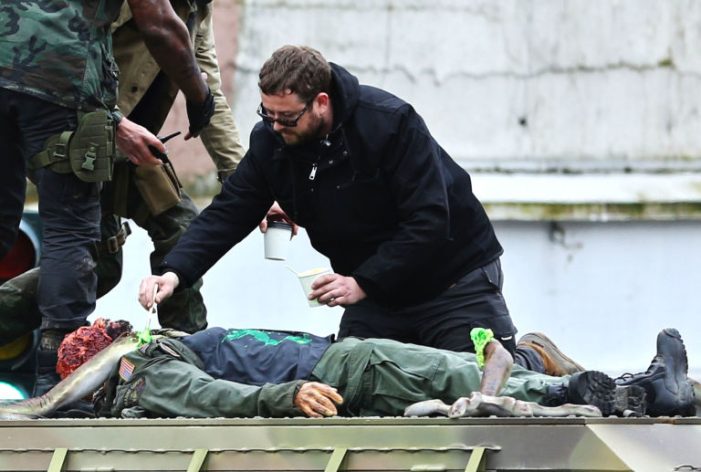 In the April 16 script, some of the characters are switched around from what they are in the final film. Nettles in the script is actually Lynch from the film and Nettles in the film is Flyboy from the script. Originally, rather than being shot by the Upgrade, Lynch was killed by a hybrid creature.

It was well known that Edward James Olmos was cast in the role of General Woodhurst. Ultimately his entire role would be cut from the film but originally Traeger wasn’t in command of efforts to retrieve Predator technology, he was working for General Woodhurst and Project: Stargazer was specifically a CIA operated venture that was being run off the books by Traeger to profit on Predator technology.

Woodhurst was removed from the film as of the first test screening that we know about which took place in November 2017.

Throughout the script there were a few scenes in which Traeger was reporting to Woodhurst. He becomes more prominent in the script after the Upgrade gets aboard the Ark. He has Traeger killed by a sniper before introducing himself 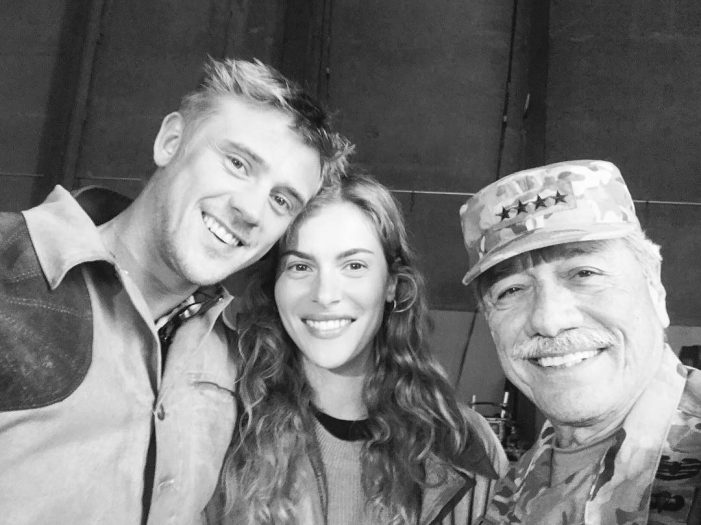 After Traeger and his men retrieve the Ark and bring it back to Area 51, the Upgrade Predator attacks the base in order to steal back the Ark. We see some of these in the trailers.

In the first test screening that we know of, the Emissary Predators are first introduced to the Loonies by Traeger outside of Area 52. Traeger reveals that the Emissary have been around for about a year and that “they’re with him.” Traeger also explains that they let the Emissary’s out every so often to hunt.

Though used quite often in the marketing, the APC chase sequence had actually been removed from the film since November 2017. It would have taken place after the Upgrade Predator stole back the Ark. The Loonies, Emissary Predators and Traeger’s men followed the escaping Upgrade Predator on APCs. The Upgrade unleashed the Menagerie and all the characters proceed to fight them off while chasing the Ark.

During the attack on the APCs, Rory and Casey try to remotely activate the self destruct collars the hybrids are wearing but the Ark is out of range. Rory manages to launch the Ark and fly it within range of the APC convoy but he can’t land it or control it very well. Casey removes the console that controls the collars and gets in an escape pod and launches herself down to the convoy. Once she’s in range, the collars activate and detonate and Casey crashes.

After getting out the pod, Casey is attacked by a hybrid but once it gets too close to her and the console, its collar activates and self destructs. The hybrid is mortally wounded but still alive. Casey rips out the creature’s spine, killing it. Rory then crashes the Ark into a high school football field.

Following the Ark’s crash and the death of the Emissary’s, the Upgrade kidnaps Rory and the film proceeds largely like the finished edit. There are a few small changes though:

In the early test screenings the film just ended after McKenna and Brackett killed the Upgrade Predator. Some last minute reshoots were done to add an additional ending scene that would set-up potential sequels. The finished film featured a Predator Killer suit ending but another two endings were also shot.

The Return of Ripley

There were three different endings shot for The Predator including The Predator Killer suit. One of the endings featured Ripley from the Alien series in the pod wearing a breather mask. You can see Ripley’s name tag on her costume.

Sigourney Weaver wouldn’t have been involved in The Predator and instead Breanna Watkins played Ripley under the mask. Even though it was deliberate design decision, the moving ‘fingers’ and ‘tail’ reminded the filmmakers too much of a Facehugger and it was cut. Amalgamated Dynamics made the prop mask using concept art from Fausto De Martini.

The Ending – The Return of Newt

The other unused ending for The Predator was an adult version of Newt in the pod wearing a breather mask. The actress playing Newt was Breanna Watkins again.