Kevin Peter Hall. Ian Whyte. Two names known amongst the community. Names known for performing inside the suit of our favorite intergalactic hunters, the Predators. With the release of Predators, three new names have been added to the hallowed list: Brian Steele, Carey Jones and Derek Mears. I recently had the chance to talk to Brian Steele, the man behind Mr. Black and Falconer. 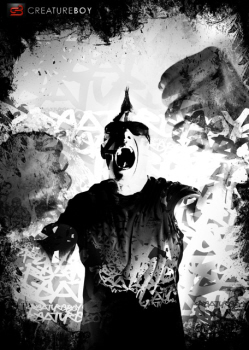 AvPGalaxy – This is Corporal Hicks here with Brian Steele. Thanks for taking the time to talk to us. For those who might not know the name, what is your connection to the Predator franchise?

Brian Steele – Thank you, For two seasons of the Harry and the Hendersons TV show I played Harry. The character Harry, as well as the Predator, was originated by Kevin Peter Hall. It took almost twenty years but, I finally got the opportunity to portray another of Kevin’s characters.

AvPGalaxy – The majority of your acting career seems to have been inside a suit. How did you come to be a suit actor?

Brian Steele – One of the first jobs I had when I arrived in Los Angeles in 1987 was to be Frankenstein’s Monster at the Universal Studio theme park. I worked at the theme park portraying the monster for almost four years.  After doing this I became hooked and found my calling as a creature performer.

AvPGalaxy – What is about acting inside a suit you find most challenging?

AvPGalaxy – And what about the most appealing aspect of it?

Brian Steele – Working as a team bringing a character to life on set with the artists from the effects shop that created the creature.

AvPGalaxy – How familiar were you with the Predator franchise prior to being cast?

Brian Steele – Very familiar, I’ve seen every movie in the franchise many times. Predator is my favorite! Kevin’s performance is so flawless.

AvPGalaxy – How did you come to be cast in Predators?

Brian Steele – I was asked to be on the production by KNB Effects. They were handing the Predator suit design and fabrication and also the casting of the Predators. My name was brought to them by my buddy and actor Derek Mears. 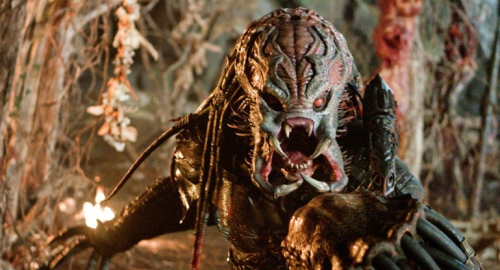 AvPGalaxy – Due to the “less is more” approach taken for the film, the new Predators don’t receive as much screen time as say in the original films. Did the lack of screen time effect you in trying to differentiate the characters of the two different Predators you played?

Brian Steele – It was always on my mind that each Predator had to be it’s own character. It had to be identifiable and it’s performance should stand on it’s own. I felt the script lent itself to the Berserker getting the most character development. I wish the others had the time he had to develop over the film.

AvPGalaxy – How did you prepare for the role of being a Predator? Did you took at the other actors like Kevin Peter Hall or Ian Whyte?

Brian Steele – First I trained like a mad man to make sure I was up to it physically. I then made sure to study the films and I went to the source of all things Predator, Kevin Peter Hall.

AvPGalaxy – How would you compare suit work for the Predators to some of the other suit work you have done?

Brian Steele – It was different in scope because there was so much source material on the Predator. The character isn’t being developed from scratch. There is already an outline in place on what is expected from the performance. With other characters I have done the canvass is blank which allows me a different type of freedom on personality and movement.

AvPGalaxy – In the Hanzo duel you were fighting using a blade on your arm rather than in your hand. Was the awkward position of the blade difficult for you while acting in the suit?

Brian Steele – It was different experience than I’ve had in the past while fighting with a sword. Losing wrist movement really takes away the number of moves you can make either offensively or defensively. It was like fighting with a 3 foot longer forearm. It took some getting use to. 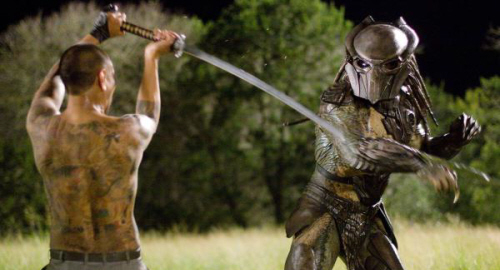 AvPGalaxy – The movie contains a fight between two Predators. Was it difficult to choreograph and perform the fight considering you were both in full suits and head gear?

Brian Steele – Rehearsal, rehearsal and rehearsal! The stunt coordinator gave us plenty of time to get the structure of the fight in place before we began to slowly put on the layers of the Predator suit. We would then rehearse some more with different layers on.  Once it was time to film we had all the beats of the fight and footwork memorized so we could really go at it when we put it on film.

AvPGalaxy – What was your over all experience of working on Predators?

Brian Steele – Working on this project was a dream for me. The original movie just made my jaw drop. It was a catalyst for me being the performer I am today.

AvPGalaxy – Have you had chance to see the finished film or fan reactions? What do you reckon to how it’s been received?

Brian Steele – The reaction has been overwhelmingly good. I just came back from doing a signing at the SDCC for SideShow Collectibles release of the Predators figures and Masks. The signing was suppose to last for an hour and it lasted for over four hours. It was great to meet and mingle with the fans of the film and franchise. 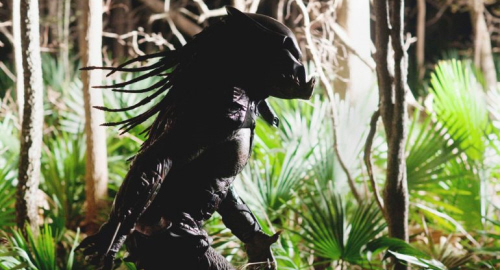 AvPGalaxy – Let’s talk sequels. Would you come back again?

Brian Steele – Yes, if the script was good! For a sequel, I would like to see a Predator movie that deals with the Predators fighting strengths, agility,and style and of course pages and pages of Predator character development.

AvPGalaxy – If you were given the producer or director role, was their anything you’d have liked to have changed in the movie?

Brian Steele – Films done, no second guessing for me.

AvPGalaxy – Thanks for taking the time to talk to us. Before we sign off, is there anything you’d like to say to our readers?

Brian Steele – Thank you! It was a great experience for me to work on Predators. Thanks for taking the time to do this article. I really appreciate the franchise and the fans! Anyone looking to find out more about me can go to my website www.creatureboy.com or visit my facebook page, creatureboy. Thanks again….