This section covers the various Predators deleted scenes that were featured on the Predators Blu-Ray set.

Dead Man’s Parachute
This is a short seconds long scene that takes place after Royce comments “His chute didn’t open” when the American soldier falls to his death. The parachute attached to the soldiers corpse suddenly opens, scaring Cuchillo.

Cuchillo and Isabelle
Again, another few second long segment that takes place after Royce asks Isabelle if she is from the Israel Defense Force. Cuchillo merely states: “I thought bitches weren’t allowed to be sniper”. She responses with “is that why they didn’t take you?”. He laughs and remarks “bitch”.

“If You Insist” (Source: Predators Blu-ray feature – Predators as Prey)
This is an alternate take of when Royce “helped” Edwin from the tree. In this take Edwin is screaming “get me down!” Royce cocks his AA-12, says “if you insist” and shoots. 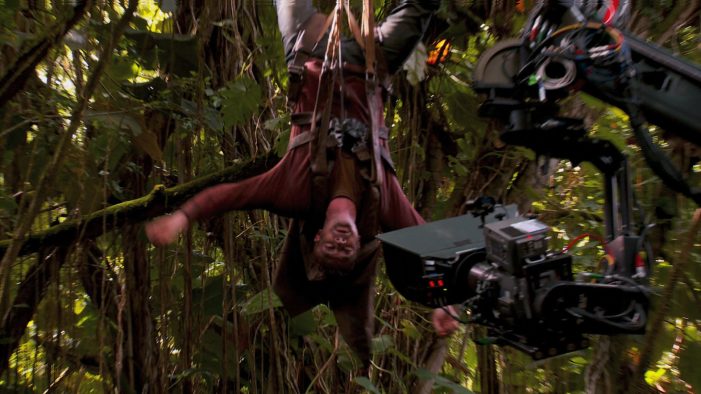 Team Orientated Group
Part of this scene was featured in the trailer. After Royce decides they need to head to high group, Isabelle follows saying “comeon, we need to work as a team”. Angered Cuchillo replies “Bitch, does this look like a team work orientated group of individuals to you?”. She replies: “Somebody did this to us. You want to kill each other, do it after we get out of the fucking jungle”. As she walks off Stans comments “I don’t take orders from snatch”. Unphased, she responds “Fine, go the other way. Get eaten by something. Enjoy”. Then slowly, one by one the others follow until Stans runs after them.

Third Most Wanted
This scene explains why Stans was brought with the group and takes place almost straight after the previous scene, after Stans catches up with the group. Stans start to comment on how he’s famous and that he’s third on the most wanted list. Edwin and Cuchillo both comment on how they’ve heard of him, Cuchillo, seemingly offended by Stans, comments “Hey, I kill people for big money. A reason. You slaughtered 36 people for nothing”. Walking away, Stans merely corrects him. It was 38. Edwin askes why and Stans explains: “Why the fuck not?”

Cuchillo Unleashes
This scene takes place as the group comes to rest before Isabelle demonstrates that her makeshift compass isn’t working. Edwin informs Cuchillo that he “needs to pee”, Cuchillo states “woman pee, men piss”. Edwin askes what Cuchillo does. Deadpan, he responds “I unleash”,

“Why Are You Here?”
This deleted scene takes place after Royce identifies that Edwin is the odd one out in the group, seeming harmless. As Edwin leaves the group to answer natures call, Royce sneaks up on him, machette to throat and askes why Edwin is here. Edwin informs Royce that during an operation Edwin was halucinating due to drugs (which he shows Royce) and thought his saw his patient return to consciousness and start attacking him. He stabbed her 9 times in the chest. Royce seems to judge Edwin and he responds “You look me in the eye and you tell me you’re any better”.

“They’re Smarter Than That”
Set just before Noland opens the hatch to the drilling platform and lets everyone in, Nikolai pulls out a claymore and begins to set it up. Noland tells him “That wont work. They’re smarter than that”.

Stans and Isabelle Naked
Just after Stans shows Edwin and Nikolai the tattoo of his sister, Stans gets up and approaches Isabelle. He explains how he really likes sex, how he thinks Isabelle is attractive and that its been some time since he last had sex. Fearing the Predators get to them before he ever gets another chance, he propositions Isabelle. He might not have said it quite so politely but that’s the general gist. Initially she just replies “Okay”. A shocked Stans asks “really?” With a grin she gives him a definitive “no”.

“They’re Still Coming”
After Tracker observes the groups footprints, we see them getting out of a lake or river. Looking back, Royce comments: “they’re still coming”.