11/12/2009. The day AvPGalaxy was given the chance to visit the Rebellion headquarters. And what a day it was. I arrived to the train station to find a bunch of the very talented developers, Martin from Sega and the guys from aliensvspredator.net waiting for me. Fashionably late and all that jazz.

After a lovely curry and informal dinner with everyone we headed through the streets of Oxford to an unassumingly little building that actually houses the staff of Rebellion Oxford. Inside this mystery building I was treated to the story trailer which was released a few weeks ago. All in-game footage, all in-game cinematics. Amazing.

Following that we got hands-on with the first levels of each of the species. 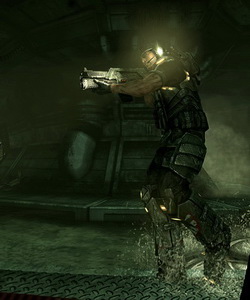 It was dark in Mega City One. It was cold. I think they like it that way, to put you on edge. There was sound all around me. The motion tracker was going crazy. I don’t know how long I’d be there, must have been half of an hour or so. The minutes all just blended into one, the adrenaline kicking in. I’d started off so cocky. I’d done this countless time over the years, I could handle another mission. I’d only just returned from a battle a few months earlier.

I’d already run out of ammo twice. I wasn’t being smart, I was panicking. Screw clearing up the infestation, I was getting out of there. Sprinted through the sewers I refused to stop, I’d already made that mistake the first time. I was almost out…almost there and bam! I was down, I turned to see an Alien dragging me away…

And then the level ended. I was of course at Rebellion HQ in the gaming room known as Mega City One (*cough* Judge Dread which Rebellion own *cough*) in lovely Oxford. As I’m sure you all know Sega and Rebellion offered AvPGalaxy and fellow community site aliensvspredator.net the chance to get a hands-on with the next-gen Aliens vs Predator title. Being the badass corporal I am I opted for Colonial Marines.

All three campaigns start off with a short prologue so you know the backstory regardless of the order you play the campaigns. We’re on the colony BG-386, also known as Freya’s Prospect. Weyland-Yutani has discovered an ancient Predator pyramid. We play witness to Karl Bishop Weyland as he marvels over the giant structure, all around him are technicians preparing to open the doors. They open and a massive beam of energy is blasted to the stars…

You play a marine known as the Rookie. You start the campaign aboard a dropship with your squad of marines. A Predator mothership decloaks directly above you and opens fire and destroys the marine ship you just embarked from, the Marlow.

I sat there and I just said “wow”. The level of detail on the mothership was amazing. They made sure to include the Predator style ships docked as well. Looking around at my fellow marines I marveled at their armor and how well made the models were. I’ve long been a champion of AvP1 being the definitive Colonial Marine experience but we’ve been taken to a whole new level now.

My dropship quickly headed down to the surface. We were initially called in to deal with an Alien infestation before the Predators showed up and ruined the party. Our dropship touches down in the colony and then it all goes to pot. Next thing I know am I’m being dragged through the colony by my buddies and then more Aliens come. There’s nothing I can do, I’m too badly injured. I can’t even see what’s happening. 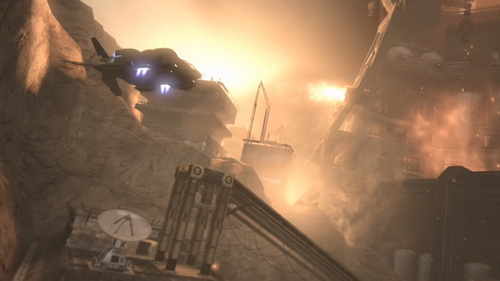 And then it’s quiet. I wake up in a garage, all alone. And through my good friend Corporal Tequila I’m introduced to the basics of gameplay. It doesn’t take long and then I’m off exploring the colony to meet up with my marines. It looked great, it really did. The colony has that same prefabricated feeling that Aliens did. Not the same appearance but very similar, more modern. Having just recently seen Avatar, I’d say they share a lot of similarities in the colony design. Jim’s old Hadley’s Hope advanced a great deal.

And that’s at the core of Aliens vs Predator, in the story, the single player, in the multiplayer and in the technology. This is a new age of gaming and Rebellion is aware of it in every aspect. The version we played was on the Xbox 360 (thank you guy so very much) and the level of details in the graphics was amazing.

With Tequila’s guidance I move through the dark and abandoned colony searching for my fellow marines. Armed only with the VP78, some flares and a piddly torch I move on. It’s so full of tension: Just how I wanted it. I’ve always loved Rebellion’s 99 AvP for being so scary and it’s great to know they’ve not forgotten that’s what made the marine campaign so great.

And that’s one of the important elements of the campaign. Without that, it’d be another shooter with Aliens guns. Not only have they re-produced and updated the weaponry and locations, they’ve also helped it stand apart from shooters out there with the nerve-wracking tension. Rebellion aren’t amateurs. They know what they’re doing.

The first encounter with the Alien was a prime example of that. I knew it was coming, I just didn’t know how. So when that Alien burst through the vent and decided it wanted to shred me, I shit my pants. All I had was a piddly little pistol. And it was amazing! I’m sat there thinking “Keep it cool”. It was truly amazing.

Moving through the level, I eventually meet up with Tequila and get myself my trusty M41A. I do love the Pulse Rifle. Turns out some buddies of mine are trapped in the strip club, and they need my back up. Leaving Tequila behind to do…stuff, I head off on my own once again. It’s during this little section that I find my first audio log. 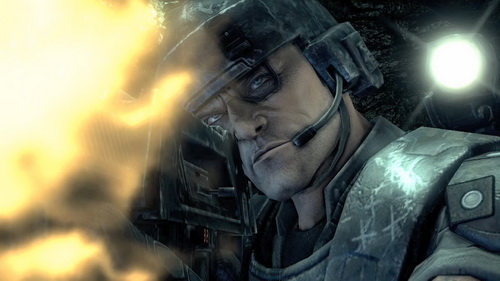 As we already knew from the Lance Henrikson interview, AvP will include audio logs for the player to pick up. Similar to Doom3, the audio logs are told by numerous characters, not just Weyland. I only listened to the first one as I didn’t want to hold everyone up but the log was going over character backstory between me, the Rookie, and Tequila. I do think it’s all backstory though and doesn’t affect gameplay like having to find codes by listening to them. There is an achievement for collecting all of them though.

I soon got to the infamous stripper club section of the first level. My fellow marines were holed up inside, defending themselves from the Aliens. Stepping in I couldn’t help but be marvel over just how amazing the hive resin looked. It was brilliant. Then the shit hit the fan. Getting up to the next floor to help them I got trapped and then the Aliens came for me.

Using the resin as cover to move about unnoticed, I found myself unable to keep track of them, often narrowly avoiding an ambush. It was brilliant. I felt more in the shoes of the Colonial Marines than ever. I ran out of ammo here and ended up with the pistol. It was tense and it was terrifying. It was unlike any other FPS I’ve played since AvP1.

I noticed several cool things during this section. First was that when you shot the Aliens legs out, they’d crawl after you like in the original but with far sexier graphics and animation. Second is just how useful the melee is. Now don’t get me wrong, I wasn’t pulling out a sword and going crazy on them.

The Marines melee is down to a simple block with the rifle and shoving at the enemies with the rifle as a light attack. They only buy you a few precious seconds but if you use them wisely, you can save your ass. I wouldn’t recommend getting too reliant on it though. I learnt the tough way it’s easier to bail then try and be cocky.

I know some of you aren’t going to like the melee and will bitch and moan but in terms of gameplay balance, it gives the marine player a chance when it comes to the CQC that will be prominent in the online play and help defend against the Aliens. 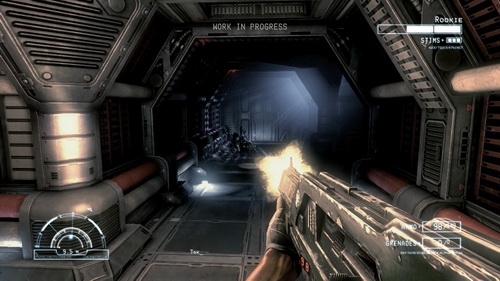 Well I was too late anyway. All my brothers-in-arms had died. Looks like I was back to being on my lonesome, armed once again with my pistol. The next section of the first level is the part we initially heard about when the marine campaign was revealed to gaming outlets. The multiple levels with the sentry guns. I wont go over that since we’ve all heard about it but I will say…be careful. You might take out a buddy crawling out a vent thinking it’s a Xeno. Ooopps.

Following this section I’m ordered to bug out. Following Tequila’s orders I head down to the sewer system to escape the colony. This bit was a hoot. On my first couple of attempts I tried to be the badass marine, taking the Aliens on. Turned out to be more difficult when you had a bunch of them on your hands. The AI is impressive, it loves to flank you and make life hell.

I eventually learnt that not all situations could be fought out of and just legged it. As I finally made it towards the end, I found myself grabbed by an Alien and was dragged away thus ending my exhilarating experience as the marine.

I haven’t been this excited by a game in a long time. I love Halo but the experience of playing ODST doesn’t compare. I love FPS and even the be-all-end-all that is Call of Duty didn’t churn my butter like this did. It was tense, it was scary, it was detailed, it was wonderful. This is the game I’ve been waiting for a long time.