Finally we’ve come to it; the perfect organism. The alien offers the most unique gameplay of the bunch. What is a bit disorientating at first, will soon feel natural as you drop on your prey. The alien is a wreaking ball. There was concern that the alien would be given the shaft in terms of balance; nothing could be further from the truth. The alien deals a lot of damage, and can absorb a lot as well. More than once I found myself as a marine trying to take down an alien with a shotgun and needing to fire two or even three blasts, where it never took more than two to drop a predator at the same range(though, this may have just been luck on my part where the predator was already injured). The aliens acid blood also proves helpful in a fight, but its not something to count on. It will weaken you enemy yes, but its not strong enough to take them out with you like some sort of alien martyrdom. The alien is not invulnerable, and when you need to heal find a safe spot to regenerate. If you’re in the right situation, or feeling lucky, you can always gain some extra health with a good ‘ol fashioned headbite!

As far as attacks go, there isn’t much to say. You have your claws and your tail. While it doesn’t sound like much, it is more than enough. Stalk your enemy, and execute them. I pulled more trophy kills with the xeno than any other species. Pure, in its simplicity. Between this monsters durability, speed and strength, aliens really are something to be admired. 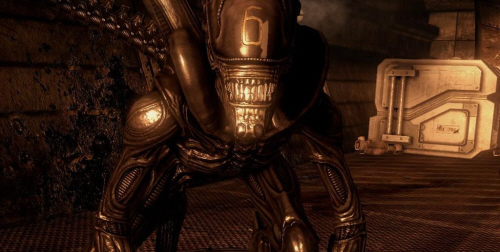 The alien moves with blinding speed, and is able to go into a focus mode of its own. In this focus mode, the edges of the screen become slightly blurred and an opaque green circle will appear around an enemy. When this occurs you can target pounce and knock the enemy down, setting up for a quick trophy kill. The aliens ability to see enemies through walls (via a red outline of the enemy) is very helpful. In Infestation mode, this ability is key. Wall-walking is made less dizzying by way of a non intrusive arrow that shows which way is down, and will darken to show which surfaces can be transitioned to. Transitioning is done manually by the player.

A tip: Use your wall-walking to its fullest! Most players tend to keep their eyes on the ground, so sticking to the ceilings is the way to go.

As far as trophy kills go, they are gruesome and plentiful! Not only is it rewarding to earn one, but to see what kill you executed also brings new and twisted excitement to the table. These trophy kills garnered a huge reactions at the event, from sick laughs to groups winces of pain; and they always brought a smirk to my face. 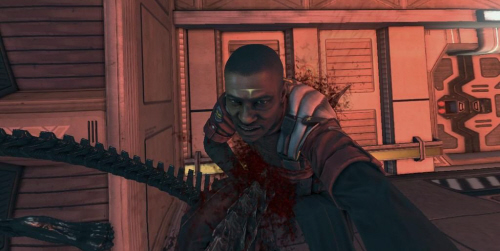 The game modes I played at the event were the free-for-all team deatmatch, Hunter, and Infestation. AvP’s free for all is really interesting as there are 3 different types of enemies to watch for at all times. Quite often I would find myself in three or even four-way battles. Getting a killstreak going is quite the challenge in this mode, and I only made it to a seven killstreak myself (actually… I was fairly pleased with that!).

Hunter mode places you in a group of Marines facing one predator (or if you’re lucky, you’re the predator at the start). The predator must hunt and eliminate as many marines as it can. The marines job is to stick together and live. The predator bleeds, and its your job to kill it. The marine who slays the predator is rewarded with new life; only now as the predator. This mode really captures the feeling of Predator . You have to be cleaver and careful as the predator, and your really have to work as a team with the Marines.

As the hunter mode captures the feeling of the predator movies, the Infestation mode captures the feeling of Aliens. Here you have a group of marines pitted against one alien player. The marines must work together in order to keep the aliens at bay. As each Marine dies, he is reborn as an alien. So, when playing on the Marine team, as your number dwindle, the aliens grow. When I played the marines would always try and stick together to start, but would eventually be broken apart most of the time. Check those corners! The last marine standing is victorious.

As a reward for your kills, you will unlock new skins with XP. With a five killstreak, the XP you earn for each kill will increase. Punish the same foe five times in a row and you will see “Persecutor” appear on your screen. In addition to skins, XP will unlock two trophies/achievements. The only way to earn XP is by jumping into a ranked match and doing what these three fiends do best; kill, kill kill. 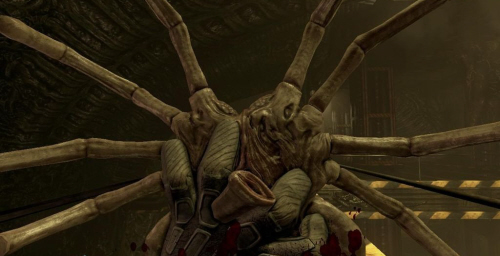 Want to have a match with just aliens versus predators? You can set up “friendly” matches where you’re able to set all the game rules to your liking. You choose the map, available species, species ratios, team balancing, time limit, score limit, or even turn friendly fire on or off. Its up to you to build better worlds… for mayhem.

I played four maps in Orlando. The maps each offer a feel of their own, and all have aspects that each species can use to its advantage. Ruins, for example, features tall pillars that predators could use as an eagles nest to watch for prey (and avoid the water on the ground), while the aliens could navigate tunnels and corridors to get the drop on their prey. While the marines.. well, keep an eye on that motion tracker and watch your back! I also had some limited play time on a map named Refinery. This map has plenty of nooks for the aliens to use, and well as plenty of closed corridors for the marines to keep secure. The predator seemed to have the hardest time in this map, but don’t think that they got a raw deal here. There were plenty of places to be found that gave the predator a fantastic vantage point for tracking and subsequently eliminating its prey.

There will be eight maps at the release, and four available for DLC (or, with a pre-order from GameStop).

I was excited about this game before, but after getting a taste, I’m addicted. It doesn’t take long to pick up and is very welcoming to new players; however, it will take time and practice to master, making it more rewarding for veteran players. Learning when to use what will take some getting used to. This is especially true for the block, heavy and light attacks.

To sum up I have been jonesing for more since I put down the controller. February 16th can not come soon enough.

Special thanks to Julian Mehlfeld.