Aliens versus Predator is a 1999 first-person shooter game developed by Rebellion and published by Fox Interactive (as well as Electronic Arts in Europe) for PC. It received positive reviews from fans and media outlets for its scary atmosphere and the varying gameplay between each species. A sequel was made by Monolith Studios and released in 2001. 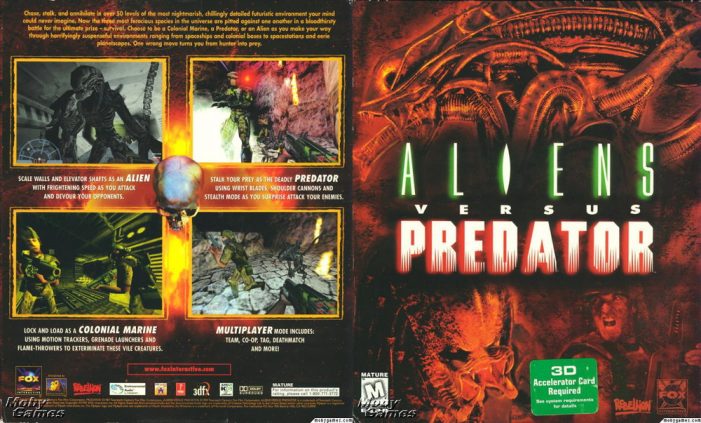 This 3D shooter gives you the opportunity to choose among 3 races in the struggle for your life control. You can pick deadly Aliens, that has very piercing claws and striking tail, beside the double mouths that can pierce the enemy skull. You can also be a Predator, also an alien race that came here to hunt, and by that he uses chameleon transparent cover, many vision modes, easy to locate anything that breaths or moves, with one gun mounted on his shoulder, and add-on knife-alike pack on his arm fist.

He also uses other weapons, and can easily zoom any enemy even to 8x. Last race is Humans, to be specific, a Marine. Without weapons he’s fairly weak, but that’s why his weapon arsenal is huge, flamethrowers, miniguns, machineguns, bazookas, etc. and beside that he can watch in night-vision mode, or use his flares to enter the dark. However, flares are limited to five at the time. So pick a race and demonstrate your abilities, either as a human, alien or predator. 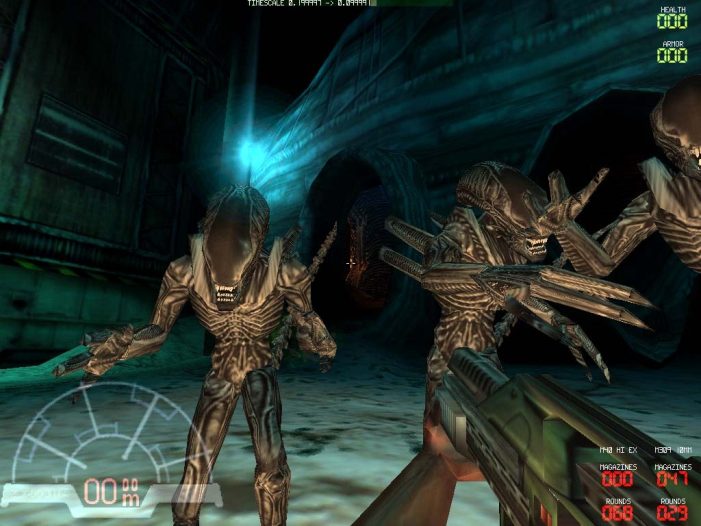 Unlike Aliens vs Predator 2, the storylines of each species is completely separate from each other. Playing as the Alien, you have to defend the hive and then reach the Marine’s spaceship, the Ferarco before heading to the Gateway station. As a Colonial Marine, you begin at a research station on LV-426 who is studying the Derelict Spacecraft. Aliens attack and you must fight your way through the research station, the derelict and the colony. You travel to the Odobenus Station before heading to the spaceship Tyrargo where you’ll battle the Alien Queen.

In terms of gameplay, Aliens versus Predator is very similar to the 1994 Jaguar game where you have three separate singleplayer campaigns where you can play as either an Alien, Predator or Colonial Marine. Each character has a unique set of gameplay traits and unique weapons and the levels in the campaign are designed around these elements. 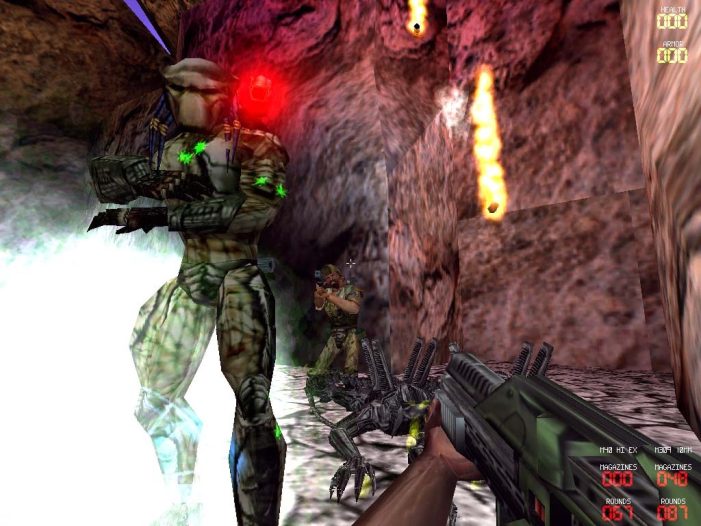 The Colonial Marine possesses armour, can use a number of weapons and can use the image intensifier and flares to light up dark areas. The Predator has many iconic weapons including wrist blades, disc and shoulder cannon. You have a cloaking device and have many different vision modes that can be used in different situations.

Playing as the Alien, you can crawl across walls and ceilings and can use your claws, tail and jaws to attack enemies. Your vision is distorted into a fish-eye lens. You can fall from any height without damage and you are the fastest of the three species. You can detect pheromones to distinguish between human or Predator enemies which are highlighted on screen.

There are several bonus levels that allows each character to explore areas of missions of the other characters. For example, the Marine could explore an Alien mission with the use of a jetpack and the Predator can use a grappling hook.

Aliens versus Predator was developed by Rebellion who were no stranger to the franchise. They originally brought Alien vs Predator to the Atari Jaguar in 1994. Soon after the Jaguar game’s release, Atari were exploring the possibility of porting the game to their CD peripheral. They approached 20th Century Fox who passed it back to Rebellion. Fox Interactive announced the game in 1995 for a Christmas 1997 release on Sony Playstation, Sega Saturn and PC.

From Playstation Plus Magazine.

The PC version was pushed back to 1999 and the console versions were scrapped altogether. Early code of the Playstation version was shown off at E3 1997. You can view a scan to the right from Playstation Plus magazine (thanks to Ross Sillifant for the scan) which shows some screenshots of the PS1 version. They said the game looked a whole lot better than the Jaguar version with better 3D environments. In the August 1999 issue of French magazine Consoles+, they said they game would be released for Dreamcast in 2000.

An expansion pack was released in 2000 called the Millennium Expansion Pack was released which included nine new multiplayer levels, two new weapons and a save game feature. A compilation title called Aliens versus Predator: Gold Edition was also released July 28, 2000, which contains the main game, the expansion and the Aliens Versus Predator: Prima’s Official Strategy Guide.

In 2001, when the game was reaching the end of support, Rebellion released the game’s source code and tools so the community could support the game. Aliens versus Predator was unofficially ported to Linux in 2001 and later to the X-Box in 2009. The community have kept the game up to date through patches.

After many years of unavailability, Rebellion decided to re-release Aliens versus Predator on January 15, 2010 under the title Aliens versus Predator Classic 2000.  The game had been updated to work with modern computers and also had support for X-Box 360 controllers. It included all the levels from the main game as well as the Millennium Expansion pack. At the start, only singleplayer was accessible but multiplayer functionality was eventually added. A patch was released four days after the rel-release which added widescreen support, optional unlimited saves, a locked frame rate, mouse improvements, and other updates. 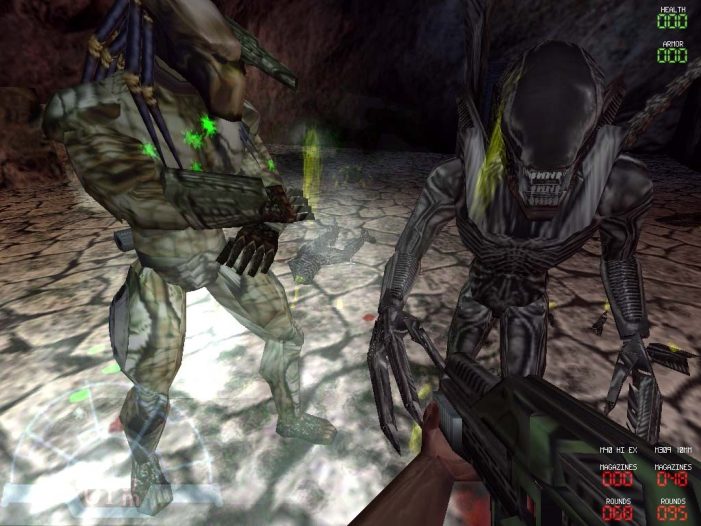 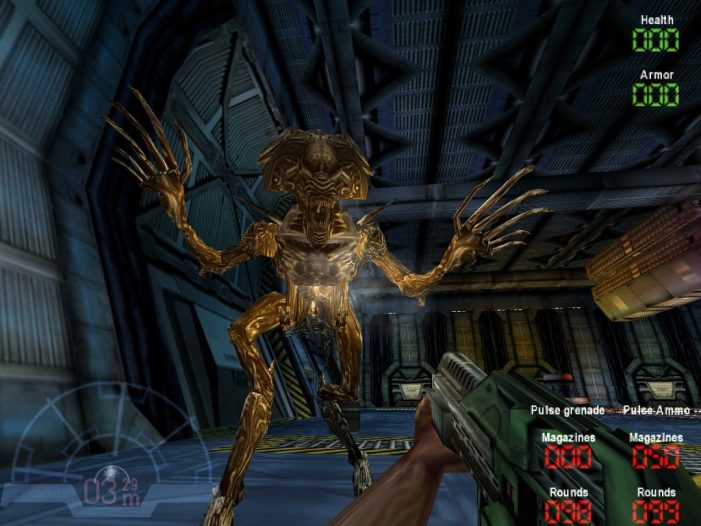 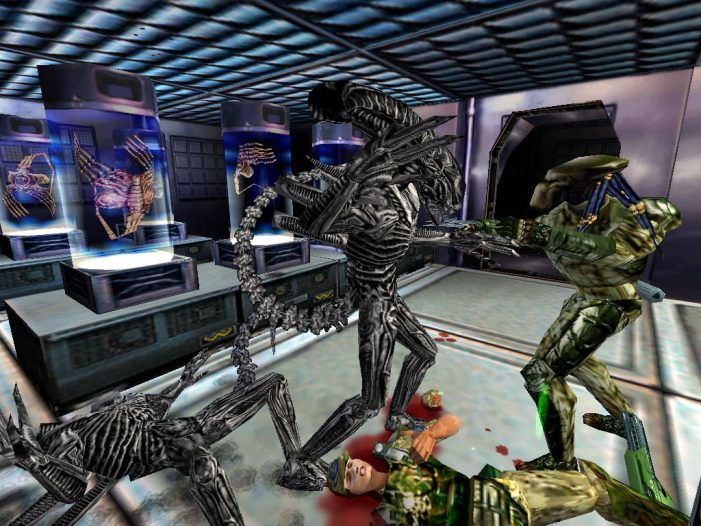 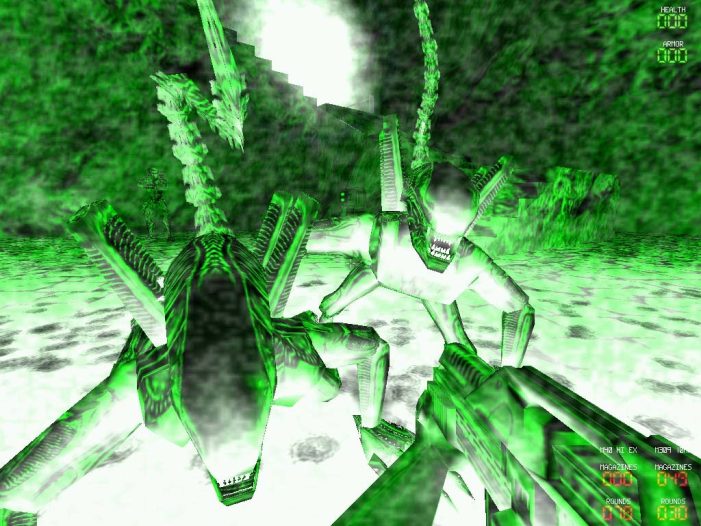 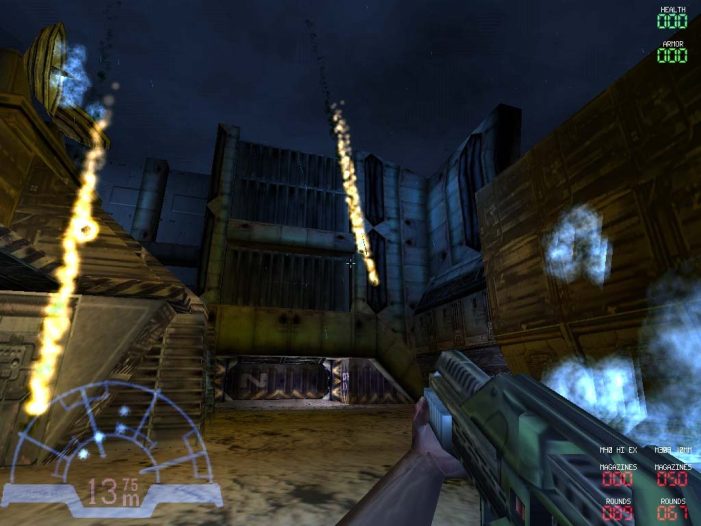 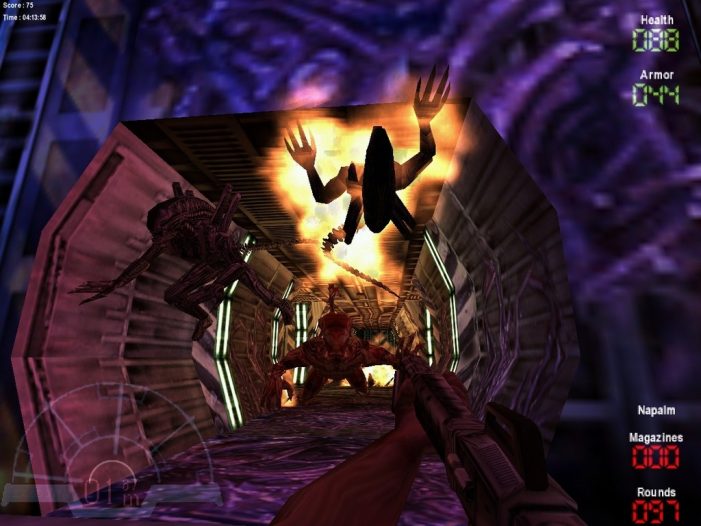 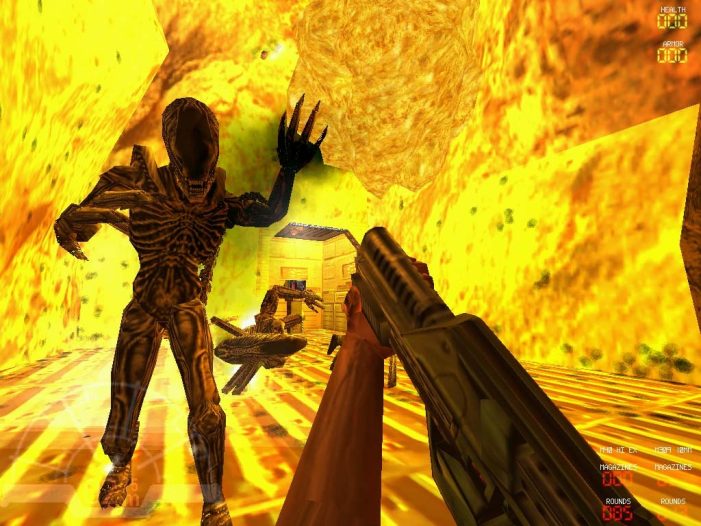 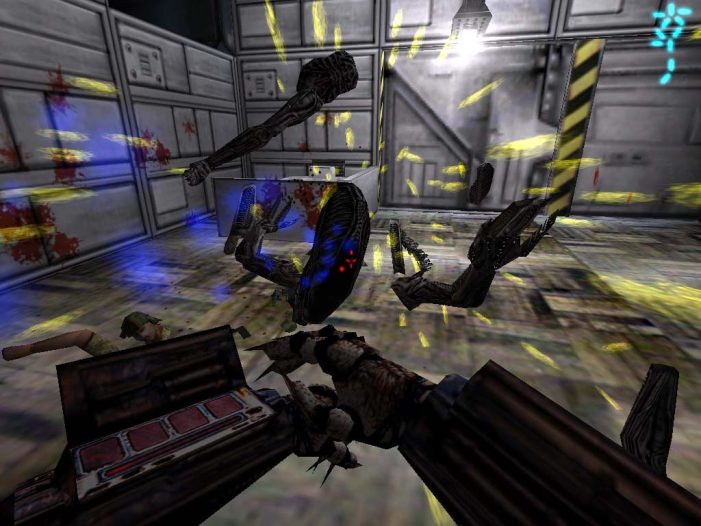 Aliens versus Predator was released in Europe in May 25, 1999 and April 30, 1999 in North America. It received positive reviews praising the terrifying atmosphere and how you can play as each of the three species while negatives included the lack of a save game which made it quite difficult. PC Zone scored it 91/100 praised the scariness and how different the characters are but criticised the lack of story and save game: “But the potential is there, and multiplayers hankering for the Aliens experience will not be disappointed with what’s on offer. As with the single-player game, AvP is a very different experience from what we’re currently used to. I’d be surprised if AvP took over the world, but glad if it did.”

GamesMaster scored it 94% praising the graphics, sound and tense gameplay: “AVP deserves a place up there just below Half-Life as one of the most enjoyable first-person shooters.” CVG gave it 4/5: “Allens vs Predator makes good use of an excellent licence to provide you with another very tasty corridor game. Well worth hunting. ” PC Accelerator scored it 8/10: “Regardless, AvP is highly recommended, and offers some of the most intense, distinctive, and downright frigtening action ever on PC.”