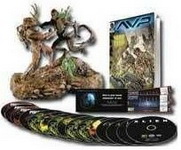 This set was released in November 2007. This is a limited edition 15-disc set including two-disc sets of all Alien & Predator films and the Unrated 2-disc set of AvP. There’s also an Alien Bonus Disc. You also get an exclusive comic book called AvP: Sand Trap as well as Alien and Predator figurines that light up. There’s also two tickets to see AvP Requiem at cinemas. This set was exclusive to Best Buy and is limited to 10,000 units.