In a recent interview with Mark Goodier on BBC Radio 2, Michael Fassbender accidently let slip the name Neomorph while referring to the Alien from the original film.  Beware following spoilers! Alien vs. Predator Galaxy can exclusively confirm that Neomorph is actually the name that the crew working on Alien: Covenant used for a brand new variation of the Alien encountered in the film.

We’ve also got some additional details about the Neomorphs for you! These Aliens are the result of the local ecosystem being mutated by the accelerant/black goo. Over time, pods started to grow on the trees and the ground, and release a spore when disturbed.

These spores infect several members of the Covenant crew by entering the body through the ear and nostrils. The spores cause the growth of the Neomorphs inside the infected hosts – something that is reminiscent of William Gibson’s first draft of Alien 3. One of the Neomorphs bursts from the back of one of the infected crew, a backburster. The other crewmember’s Neomorph erupts through their throat.

The births are preceded by the eruption of two small dorsal spikes. These spikes and a pointed skull are also used to break out of an embryonic sack (similar to the Deacon in Prometheus). The Neomorph resembles some of the older concept art of the proto-Aliens from Prometheus (see below), specifically the white colouration, with a pointed head and two dorsal spines. Upon birth, the Neomorphs move on all fours similar to the Bambi-burster from Alien 3.

When they mature, they grow significantly larger and walk on their back legs. They were more animal-like in behaviour with fang-like teeth. Unlike the earlier Prometheus concepts, the Neomorphs also have tails. In addition, the adult Neomorphs also developed a slightly translucent appearance (harkening back to unused concepts from Alien and Prometheus) as previously rumored. 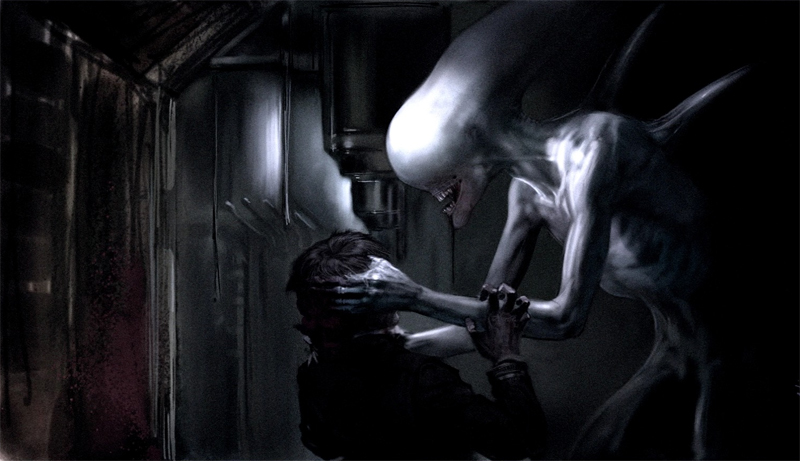 Prometheus briefly explored the concept of a white proto-Alien.

Contrary to earlier reports, Alien: Covenant will not feature the return of any creatures from Prometheus aside from the Engineer and the Neomorph’s passing resemblance to the Deacon. It’s possible that the Trilobite was mistaken for the immature Neomorph.

Earlier drafts of Prometheus, when it was a more clear-cut Alien prequel, featured the white, slightly translucent variant of the Alien as a form of proto-Alien that was discovered alongside the traditional Aliens. You can find two earlier drafts in the Alien vs. Predator Galaxy downloads section – Alien: Engineers and Alien 01: Genesis.

“Behind them, from an eight-inch diameter pipe, a WHITE MASS oozes, almost gelatinous. Silently as a liquid it pours itself into the stagnant water – and stands up. It is a humanoid demon, spindly limbs and bony back. Boneless and flexible and monstrously strong. A threshing eel’s tail.

Its blunt head dolphin-like and elongated. It opens its mouth. A pair of bony jaws jut out impossibly far, hungry and demonic.” (Alien – Engineers, 4th major revision of Prometheus, Page 86)