Ridley Scott says hard R rating for Alien: Covenant. In a backstage interview following the Golden Globes where Ridley Scott’s recent science fiction The Martian came away with 2 awards, Ridley Scott commented that he would be aiming for a Hard R rating for the Prometheus sequel, Alien: Covenant. Matt Damon won “Best Performance by an Actor in a Motion Picture – Musical or Comedy” and The Martian took home “Best Motion Picture – Musical or Comedy”.

When a reporter commented on fans being interested in the horror aspect of the Alien series, Ridley Scott responded “that’s why I’m doing it. I’m going to do pretty Hard R.” He further elaborates that he wants to do a scene with the same sort of impact that Alien’s original chestburst scene had but something “much worse.” 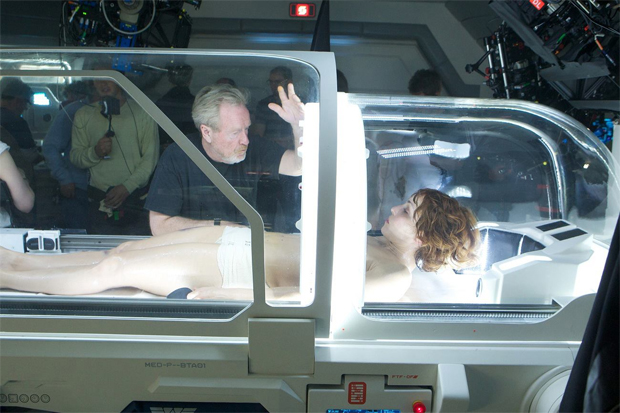 He also mentions that two weeks ago saw he “all of the south island of New Zealand in two days.” There’s a strong possability that this was whilst scouting for locations for Alien: Covenant. You can watch the whole interview, courtesy of ScreenSlam, below (Alien: Covenant is brought up around the 2 minute mark):

Prometheus received an R classification in the USA, most notably due to the scene in which Noomi Rapace’s Shaw removes the Trilobite from within herself. When it was first released, the chestburst scene in Alien was notorious for causing people to vomit or leave the screens. It will be nice to see Alien: Covenant return to the screen with a scene of that kind of intensity. Thanks to Daz85 for the news.