Following on from their interview with the legendary Alec Gillis from Amalgamated Dynamics Inc, the good folk over at HN Entertainment have turned their sights on Prometheus and Alien: Covenant creature designer Carlos Huante.

In additional to talking about other aspects of Prometheus’ design process, Carlos revealed some details about an earlier Prometheus script that seems to pre-date the Alien: Engineers and Alien 01: Genesis scripts that we have available in our downloads section.

“When we met, I had a script in my hand and it was not good. It would have been like Aliens, like an Aliens movie it wasn’t Alien it would have been an Aliens film. There was an army group there fighting aliens with all of them getting killed. It was a shoot ’em up bang-bang film with aliens in it. It was really bad but I knew that wasn’t going to be the script and Ridley had just gotten hired, the art department got hired on. I was living up in Northern California at the time. So they flew me down to meet with Ridley for a couple of days. And so I’m in the room with Ridley, I sit down and he starts telling me the story, the new script, and it’s way better. I mean that [previous] script I had read had nothing to do with what he was telling me.”

We know that Jon Spaihts completed at least 5 major drafts of Prometheus with Engineers and 01: Genesis being revisions of the last 2 major drafts but details of the earlier 3 are very scarce. Spaihts has previously mentioned that the Derelict craft played a much larger role earlier on and was eventually replaced with the Pyramid/Temple. 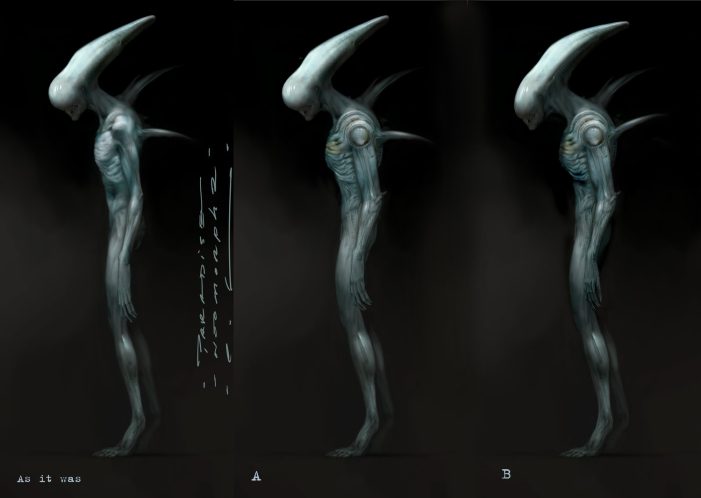 HN Entertainment also asked Carlos about his time working on Alien: Covenant where the artist revealed some details about earlier incarnations of the script in which Elizabeth Shaw was still apart of the story.

“In the first version of what was called Paradise/Prometheus 2, Shaw was alive. They find her and she’s been hiding from David the whole time and she helps them escape. I told Ridley my wife and mother-in-law, who are strong characters themselves, they loved the Shaw character and the actress (Noomi Rapace) more than any other characters in the film and they’re not science fiction people, but they liked the film because of Noomi. I think it was a studio call as to why she didn’t return. What a shame”

“So in the first version of Covenant called Paradise, she was hiding in the catacombs from David under the city and the story was that on her trip to the homeworld she got lonely and she had David hanging outside the ship, she didn’t want anything to do with him. But she still had to talk to him. Eventually, she ends up bringing his body in and reattaching him as they become friends during this trip. He ends up having affection for her in a friendship way.”

“So they end up going to the city and that’s when David looks at her and tells that story ‘Do you trust me, do you trust that I love you and everything I’m going to do from this point on is because of you and that’s all to protect you’…she looks at him and says ‘Okay, yes I do’ so then he turns around and kills all the Engineers on the planet. It’s his own twisted way of vengeance for her, he kills the planet. She is like ‘Hey, I wanted to talk to these people’ but too late the whole planet is polluted now and everyone on the planet dies.” 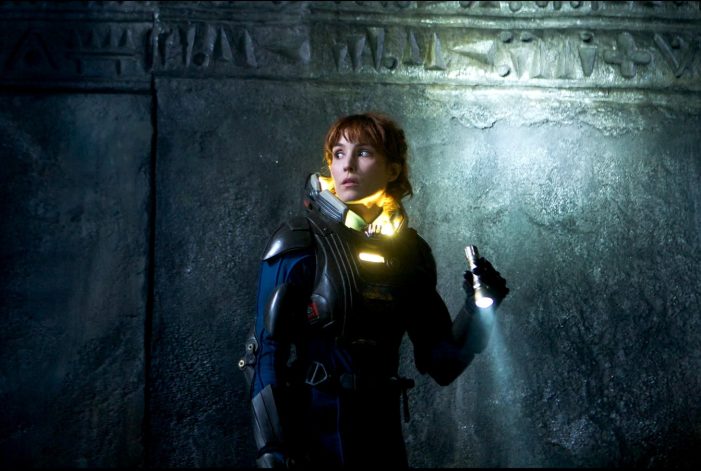 The sequence Carlos describes with Shaw re-assembling David sounds similar to the prologue script we previously released, however rather than David killing Shaw, she is forced to watch on as he kills everything she came on the journey for. You can read the other Alien: Covenant scripts in our downloads section.

Back in 2017 Carlos shared a lot of the concept work he had completed while he was working on Alien: Covenant, including some artwork of strange meerkat and dog-like creatures. He elaborated to HN Entertainment about those creatures:

“But in that version we had this pitbull kind of alien dog named ‘Bug’ that David had running around loose on the Engineer planet and then he had created these Meerkats and that’s why I called the little white things [Covenant’s version of the Neomorphs] Meerkats because that’s what they reminded me of from the old story.. David, in the old script, had an army of Meerkats that were super violent. They were not normal. They would open their mouths to reveal that all their teeth were individually attached to a finger so they had this sort of hand of teeth inside of their mouth. A precursor of things to come. showing the projecting mouth thing already starting to happen in David’s creation there.” 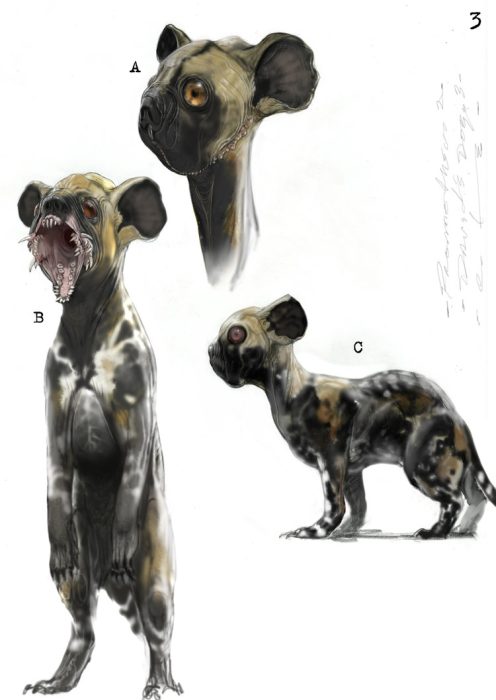 Make sure you head on over to HN Entertainment to read more about what Carlos had to say about his work on Prometheus and Alien: Covenant!