20th Century Fox screens Alien: Covenant behind-the-scenes footage at CCXP! Just before the weekend we were covering 20th Century Fox’s presence at the Brazilian convention, CCXP – Comic Con Experience. They advertised an exhibition that sounded like it would be featuring props and items from Alien: Covenant but it turned out to be a display of props from Alien Resurrection and Alien vs. Predator.

Later on the Friday night, 20th Century Fox took to the stage for their panel about their upcoming films and screened some behind-the-scenes footage from Alien: Covenant. I believe this to be the same behind-the-scenes featurette which was screened at CineEurope back in June but no further description of that event found it’s way online.

Fortunately Omelete and various Twitter users were there to describe the footage screened at CCXP (translated from Portuguese)!

“The film, Scott explains in the video, will follow a crew with a mission to colonize a distant place in space. They find a planet unmapped what appears to be harmless, with mountains and rivers (all filmed in New Zealand), but holds many dangers and the group will need to combat the danger of the place. The idea, he says, is to bring back the atmosphere of horror. A claustrophobic aesthetic:  “I think it will scare the people of truth” . He also talked about the character of Michael Fassbender , which is dangerous, but “may have a soul” . The scenarios seem grandiose, with statues of the faces of the engineers who resemble the heads of Easter Island.” 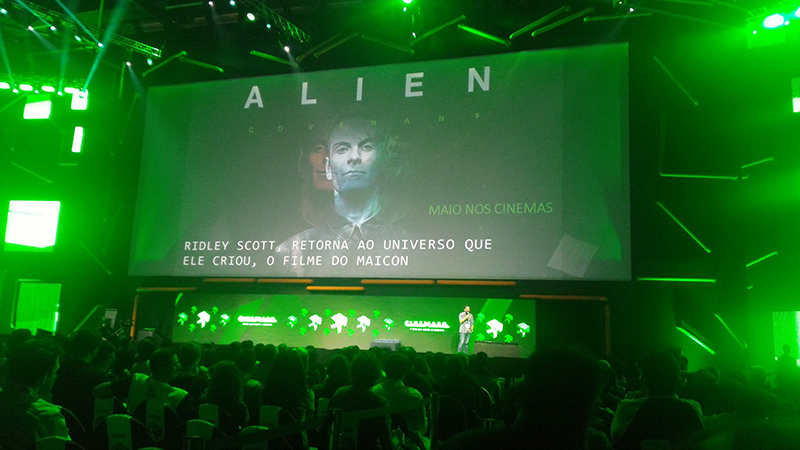 The Omelete article doesn’t go into much detail about the footage itself but does mention an interesting comment from Michael Fassbender about David 8 – that he “may have a soul.” From what behind-the-scenes chatter Alien vs. Predator Galaxy has heard of Alien: Covenant,  Sir Ridley Scott had a real interest in exploring and continuing with the David storyline and that very much seems to be the case.

The footage hasn’t appeared online anywhere yet and there doesn’t seem to be any further coverage outside of Omelete and a few tweets from Friday but keep checking back in. The trailer should be appearing sometime soon! Thanks to Ingwar and Stolen for the news.

We previously reported that 20th Century Fox and Escape60 would also be running an Alien: Covenant themed Escape Room at CCXP. Alien vs. Predator Galaxy Facebook page fan Victor Karl went through the Escape Room and was kind enough to send across some details of the experience:

“The plot was that we were the members of the Covenant ship and after answering a distress call from another spacecraft, we find a sole survivor and he’s infected…We manage to escape before the aliens arrive.”

Thanks to Victor for sending that across. Keep tuned to Alien vs. Predator Galaxy for the latest on Alien: Covenant! You can follow us on Facebook, Twitter and Instagram to get the latest on your social media walls. You can also join in with fellow Alien fans on our forums!