Alien: Covenant footage and trailer screened at 20th Century Fox 2017 Showcase Preview! 20th Century Fox are currently hosting a number of journalists at a special showcase event in New York. Fox have been showing off films from their 2017 release schedule including War of Planet of the Apes and Wolverine. Of interest to us, however, is what they’ve shown of Alien: Covenant.

As the showcase is literally happening right now, all we have are the tweets from the various journalists in attendance but more detailed reports will follow from their respective outlets shortly.

To introduce the Alien: Covenant footage, a video of Ridley Scott was screened for the journalists followed by 15 minutes of footage from the film including scenes of Danny McBride, Katherine Waterston, Amy Seimetz, Michael Fassbender and Jussie Smollett.

The specific story details weren’t provided but Jordan Hoffman mentioned that the Covenant ship itself was shown and he described it as “giant & flat” and that McBride’s character wore a “funny hat.”

The general conscious was that the Alien: Covenant footage was “terrifying, gore, tense and thrilling.” The Playlist described the footage as “terrifying. Throwback to Alien 1 & 2. Looks like full blown horror.”  The Playlist provided further clarification about the Aliens connection, saying that the footage contained “lots of nods to James Cameron’s “Aliens.” Katherine Waterston says there are parallels to Ripley.” 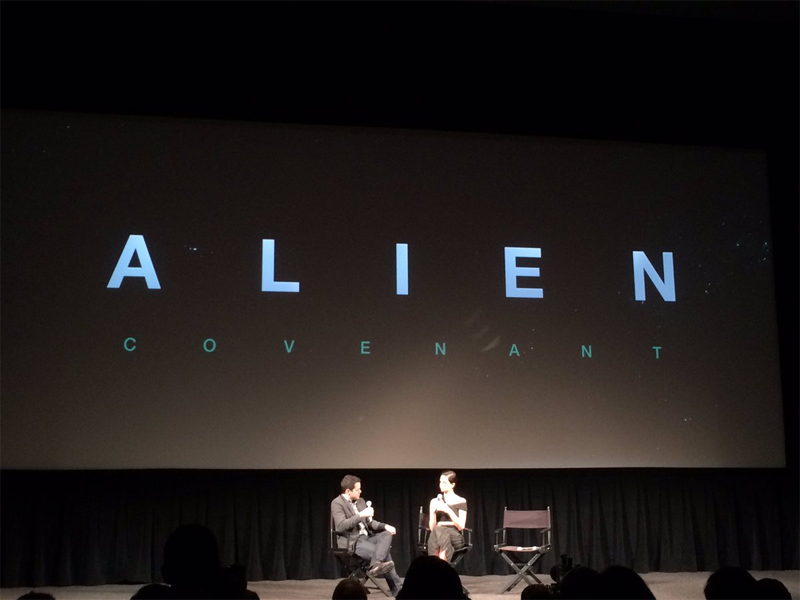 Many of the journalists made a point of how gory and intense the film was, something that was reiterated when Katherine Waterston took to the stage to talk about the film. She went on to talk about the “ultra gory clips.”

To wrap up the event, the impending trailer was screened for the assembled journalists and it sounds a lot like the recently “leaked” description of the trailer with Kellvin Chavez mentioning that “the shower scene was killer!” Paul Shirley of JoBlo tweeted the following the description: “I think you guys will be happy. I’ll just say this: face hugger. old-school xenomorph.” The Playlist also called it “horrifying.”

You can join in with other community members keeping track of the Twitter reactions on the Alien vs. Predator Galaxy forum!

With the trailer likely to be attached to Assassin’s Creed and an online release sure to happen not long before, keep tuned to Alien vs. Predator Galaxy for the latest on Alien: Covenant! You can follow us on Facebook, Twitter and Instagram to get the latest on your social media walls. You can also join in with fellow Alien fans on our forums!