As well as 2 clips and the impending trailer, Katherine Waterston also took to the stage to talk a little about the film. The Slanted has just posted an article detailing just what Alien: Covenant’s Daniels had to say:

“Oh, God. I feel like I’m gonna throw up,” Waterston joked after appearing on-stage following the clips. Waterston admitted that this was the first footage from the film that she had seen, joking that watching the clips was, “nauseating on two levels”. Waterston explained, “I can’t really handle scary movies,” adding, “it’s also just overwhelming just to see it.” The ‘it’ Waterston is referring to a particularly thrilling scene that will most likely appear in the trailer when it’s released. When asked if Waterston knew that she had signed on to a thriller she joked, “I didn’t get the memo.” 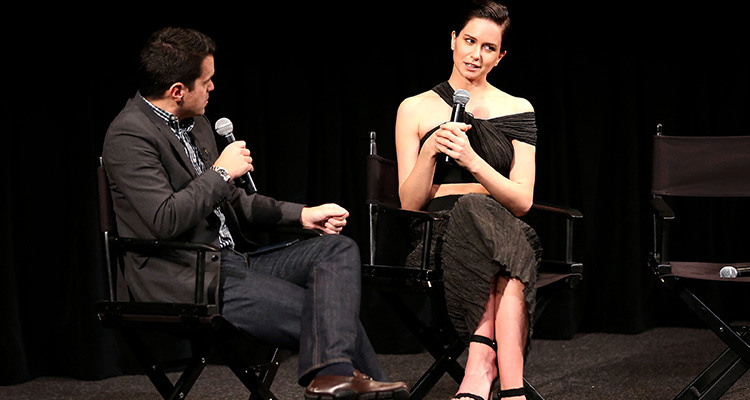 As expected, she doesn’t go into a great deal about the film but as well as mentioning that that was the first footage of Alien: Covenant Waterston had seen, she also talks about the obvious parallels that her character Daniels seems to share with Ripley and if that was intentional:

“We never really talked about it,” Waterston replied. “I mean, I — obviously I love her, and I love what she did,” Waterson explained, adding that there were “obvious parallels” to be found between the two characters. Waterston made sure to add, “But we never — we never talked about that.”

She also shares an anecdote about the inspiration for Daniels’ hairstyle coming from Ezra Miller when they worked together on Fantastic Beasts and Where To Find Them:

“Waterston explained that one of Miller’s backup wigs for Fantastic Beasts was lying around, and after trying it on, later showed it to Ridley who let her use it as production got underway. “I’m just ripping off Ezra,” Waterston laughed. “There were a couple of other ideas that I had there, but for that, I didn’t really think about her (Weaver)”. Waterston did notice the resemblance, adding, “actually, in the first film, she had that great, big curly business, yeah”.

The Alien: Covenant trailer is expected to be released towards the end of the week and yesterday 20th Century Fox kicked off the agonizing wait with a new production still from Alien: Covenant. We’re also expecting more detailed reports on the footage shown at the Showcase 2017 to be released not long after the trailer.