The Predator panel at San Diego Comic Con 2018 has just wrapped up! A full hall, with some people having camped out over night, assembled to watch as the cast of The Predator introduced the panel with a behinds the scene featurette of the everyone arguing over which pop culture icons could take on the Predator! Spoilers are inbound! Ultimately it sounds like Elsa from Frozen and her ice powers beat out the Predator and it’s aversion to the cold.

20th Century Fox also debuted two short clips from the film. First up was a clip we’ve seen a publicty still of. Boyd Holbrook introduced the clip which focused around character interaction with Olivia Munn’s Casey Bracket waking up amongst the Loonies. The following description comes via Comicbook.com:

In character, the cast sit around a motel room and mess with a passed out Olivia Munn. Rhodes tells them to leave her alone. She wakes up and sees them staring at her, all five at the foot of the bed. “Morning sunshine,” Holdbrook said. “I really wish people would stop calling me that,” Munn said. She grabs a shotgun and Key won 10 dollars. Holbrook takes the gun from her. She tries to shoot him in the chest but the gun is empty. Key won another $10 this time. They all laugh. Hey name is Casey Breckett as revealed by an ID card and she’s a scientist. She runs for the door but is kept in the room. Holbrook says they’ll shoot her and let’s her go. Thomas Jane outbusts, “Eat your p—y” and she is caught off guard. The debate what he said and what he meant. Holbrook reveals she was gooing to get shot because of a vile of science. She finds tin foil animals on her bed and goes through her things. Holbrook encourages her to stay because she’ll stay alive. She read their file though, and thinks that he has gotten people killed before. Rhodes wants to know why they’re here in the first place. She’s a biologist and is on call in case there is contact. Holbrook won this bet and the cast erupts again. Holbrook rules they need “to find this thing” and expose it. Munn says it hunts people for sport. The cast debate what that means. Holbrook says he took its gear. 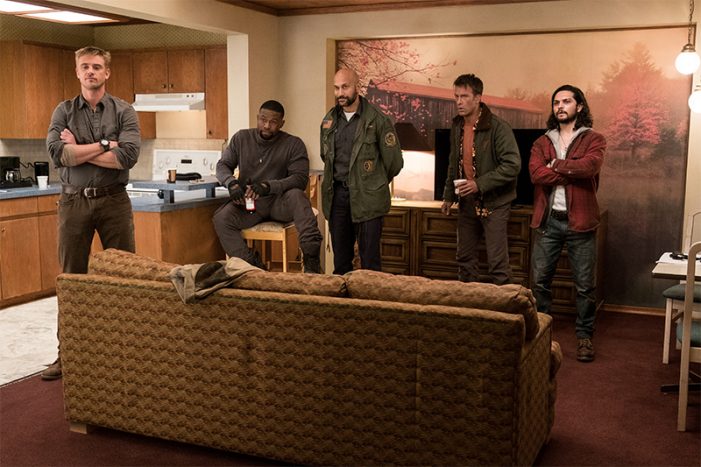 The reaction to the clip seems to have gone over pretty well, with many of the journalists in attendance commenting on the wittiness of the dialogue and the characters.

“We’re the good guys.” “Well, that’s debatable.” First clip from The Predator shows Shane Black’s rapid-fire wit is in full force among the film’s misfit mercenaries. The swear word beep button is getting a serious workout too #SDCC2018 pic.twitter.com/rfNlt18ahD

First big clip from #ThePredator shows Olivia Munn’s first interaction with the military guys. She names the alien the Predator and after she describes its mission, the guys go, “Technically, that’s not a Predator–it’s a hunter.” #SDCC18 @YahooEnt

Just saw an extended sequence of Boyd Holbrook and his crew in a hotel room waiting for a knocked out Olivia Munn to awaken. She awakes and the Shane Black banter is in full effect. I almost felt bad laughing that much for a Predator movie #SDCC #HALLH #ThePredator

First @Predator clip shows chemistry between the ensemble soldier cast as they wake up a passed out Olivia Munn after some kind of incident involving The Predator. More comedy than I expect. Lots of quick, fast-talking banter as you’d expect from Shane Black.

Prior to the second clip debuting, Shane Black talked about how excited he was about the new Upgraded Predators, saying that the Predators were taking mankind pretty seriously after at least two of their previous hunters never made it back! Birth.Movies.Death has the details below:

Shane Black was asked about the film’s “Badassery” and his answer focused mostly on how excited he is about this new big Predator. The idea is there’s a faction on the Predator homeworld who invested twice in Earth and didn’t get their guys back, so now they’re hitting us hard. This means they need a Predator that’s basically on steroids. Black talked a lot about the difficulty of creating a new Predator and making sure it looked threatening and quick despite being a somewhat silly costume in the light of day.

To prove it, we were shown the scene alluded to in the trailer in which the bigger Predator forcefully takes over for a typical Predator. They fight, and as you can imagine, it doesn’t go well for the lil guy. The giant Predator throws him onto a car, takes off his mask, punches his face in (like all the way in) and then rips his off his head. It’s fucking gross, and apparently isn’t even finished in terms of gore effects. This was followed by a sizzle real that seemed focused on violence and selling the film’s R-rated bona fides.

During the panel, Shane Black also spoke a little about how The Predator connects with the other Predator and Alien vs. Predator films before saying that he doesn’t think the concept is dead.

Shane Black says that #ThePredator takes place in a universe where the other Predator movies, and even AVP, happened. There won’t be Xenomorph references in the movie, but as Black says: “I don’t think Alien Vs. Predator is dead, do you?” #SDCC18 @YahooEnt

After the panel ended, Fox also released a brand new poster for the film! The poster was included as part of the swag-bags given to those who made it into Hall H but the Official Predator Fan App has some to giveaway to those who weren’t able to make it to San Diego! 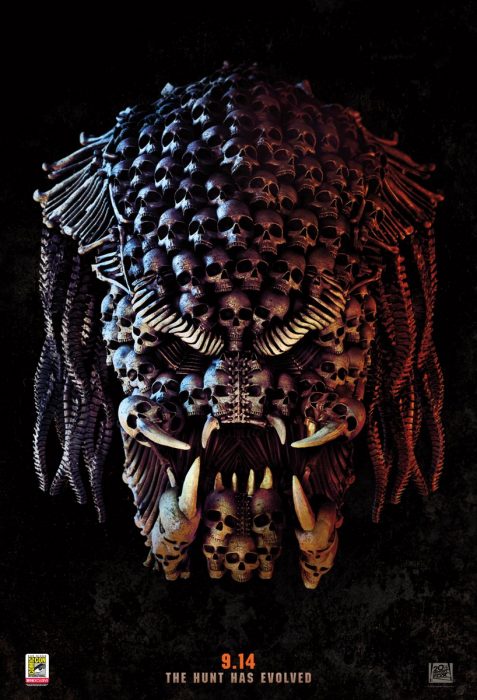 The general response to the footage on Twitter seems to have been quite positive, with many commentators saying that they enjoyed the character chemistry, jokes and the brutal fight. Some expressed some dislike towards the panel deviating from the topic of the film so much.

You can head on over to some of the larger outlets for their full write-ups of the panel: Birth.Movies.Death, Deadline & ComicBookResources.