It’s shaping up to be a big summer for the Predator franchise. Among the new media releasing is the upcoming Predator anthology book, Predator: Eyes of the Demon. The anthology is edited by writer & editor Bryan Thomas Schmidt, who also contributed a short of his own to the book.

This will be his second Predator anthology after Predator: If It Bleeds, which we heaped praise upon in our review. Bryan also edited the first AVP anthology, alongside Aliens: Bug Hunt editor Jonathan Maberry, which is due to release in early March. And now we have a cover for the Predator: Eyes of the Demon! 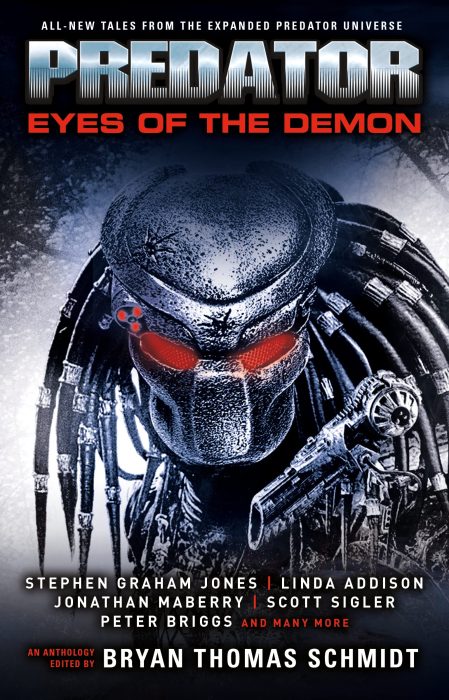 Along with the cover, we also now have the full list of authors writing the short stories:

While there are many new names to the Predator franchise, there’s also a number a familar names in that line-up! Peter Briggs wrote the first attempts to get Alien vs. Predator onto the big screen. Nancy A. Collins wrote Predator for Dark Horse Comics with Hell Come A Walkin’. Robert Greenberger previously authored Predator: Flesh and Blood. And Tim Lebbon wrote many Alien novels for Titan, along with the Alien vs. Predator Rage War series, in addition to contributing shorts to both of Titan’s previous anthologies.

Predator: Eyes of the Demon is currently available for pre-order on Amazon (US/UK). The release has been pushed back a month from May 24 to June 21, 2022. Just in time for the 35th anniversary month of the original film.

Following the cover reveal and release of the full author list, Bryan Thomas Schmidt has posted about the book on his website. This update from the editor/writer gives some clues as to what to expect from this new anthology.

“PREDATOR. My third such book over all—after PREDATOR: IF IT BLEEDS (2017) and ALIENS VS. PREDATORS: ULTIMATE PREY (March 2022) also from Titan Books—EYES OF THE DEMON is filled with great authors and stories and I guarantee you will see Predators, both male and female, like you have never seen them before. We have some awesome stories with unique approaches and settings. It’s not just the usual shoot ém up. And we did not focus on the historical time travel angle either. There’s even a new story featuring Dutch Schaefer that ties together the first two movies like never before and fills in gaps in the universe. So, along with the cover, here’s the list of great writers participating

As some may notice, several of these authors have written in this universe before as with my last books: Tim Lebbon, Jonathan Maberry, Nancy Collins, Robert Greenberger, Yvonne Navarro, Scott Sigler, and myself. But also screenwriter Peter Briggs makes his fiction debut. He’s the guy who in the 1990s sold a spec screenplay for Aliens Vs. Predator that launched a franchise (even though his script was never actually used).

We’re talk 16 all new tales here, folks. And this will be one of three Predator books Titan releases this year. That’s a lot to look forward to! We can’t wait for you to see it. Preorder now here: https://amzn.to/3IEEcUg“