Titan hasn’t officially announced it yet though. They’ve left that in the capable hands of Alien vs. Predator Galaxy! We can now exclusively reveal the cover art and line-up for Predator: If It Bleeds!

“Seventeen brand new, never before seen stories—exclusive to this collection—featuring the Predators throughout space and time. Based entirely on the original films, novels, and comics, PREDATOR: IF IT BLEEDS (a quote from the original movie) reveals the Predators stalking prey in 12th Century Japan, 9th Century Viking Norway, World War I, Vietnam, the Civil War, Hurricane Katrina, and the modern day, as well as across the far reaches of future space.” 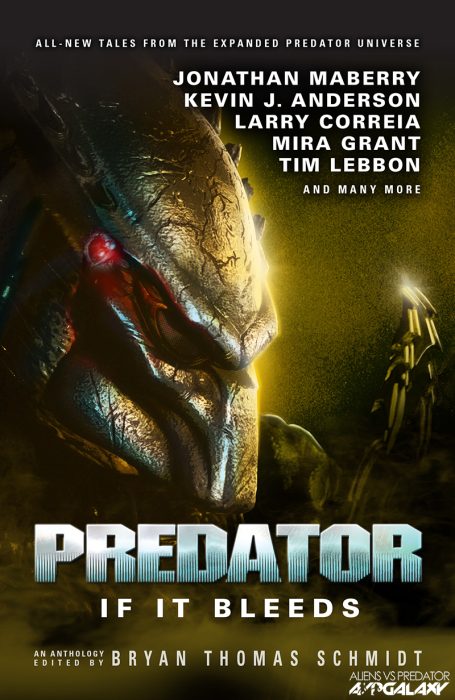 Predator: If It Bleeds, a brand new Predator anthology novel from Titan Books and Bryan Thomas Schmidt, due for release October 17th.

If It Bleeds will feature stories written by returning Predator authors Tim Lebbon (The Rage Wars), John Shirley (Forever Midnight) and both the legendary Steve and Stephani Perry (Turnabout, Prey, War). Aliens: Bug Hunt editor Jonathan Maberry is crossing franchises and picking up a pen alongside If It Bleeds’ editor Bryan Thomas Schmidt. You can check out the full author and title list below!

Alien vs. Predator Galaxy recently spoke to Tim Lebbon after the last Rage Wars book was published and he told us a little about what to expect in his short story, Devil Dogs: “I’m writing a DevilDogs/Akoko Halley story for that anthology. It’s set before the Rage War and takes place when she’s a Captain, during her early life in the Colonial Marines.”

Predator: If It Bleeds is due for release on the 17th of October and is available to pre-order on Amazon (UK/US) and other retailers now.