With Alien: Covenant due out any soon, more information from the press rounds is pouring out. Talking to Yahoo Movies, Sir Ridley Scott spoke about the reception to Prometheus and how fan reaction shaped Alien: Covenant.

“Fast-forward to 2017 and the beast is back. The classic xenomorph is front and centre in ‘Alien: Covenant’ (in cinemas Friday) – a direct sequel set 10 years after the events of 2012’s divisive ‘Prometheus’ – so what changed?

“What changed was the reaction to ‘Prometheus’, which was a pretty good ground zero reaction,” the forthright filmmaker responds without hesitation.

“It went straight up there, and we discovered from it that [the fans] were really frustrated. They wanted to see more of the original [monster] and I thought he was definitely cooked, with an orange in his mouth. So I thought: ‘Wow, OK, I’m wrong’.”“The fans, in a funny kind of way – they’re not the final word – but they are the reflection of your doubts about something,” Scott explains, “and then you realise ‘I was wrong’ or ‘I was right’. I think that’s where it comes in. I think you’re not sensible if you don’t actually take [the fans’ reaction] into account.”

Scott has spoken out in the past about not taking note of critical reception of his films but it seems he may be taking note of the fan reaction. Alien vs. Predator Galaxy recently had the opportunity to put some questions across to Sir Ridley Scott (videos will be coming soon!) and we asked about the change from Prometheus to Alien. He also told us that some of change of direction that was due to fan reaction on social media. 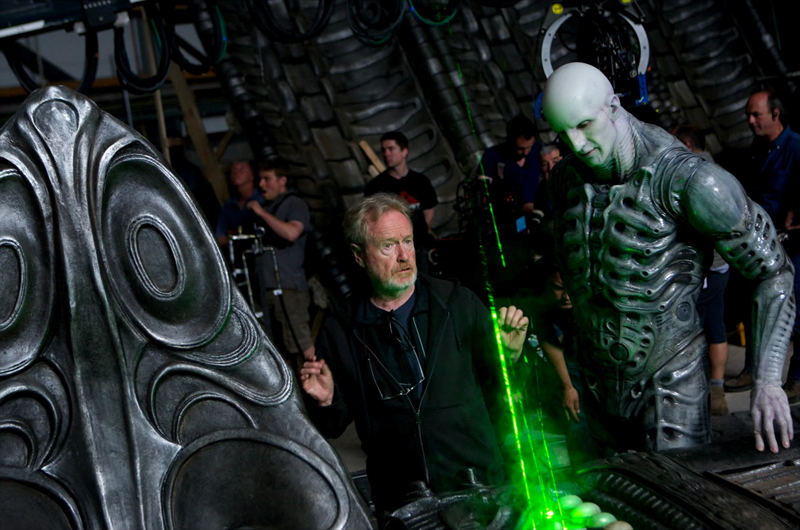 Yahoo Movies also asked Scott about the future of the Alien series. He re-affirmed that Neill Blomkamp’s Alien 5 had ceased movement, shot down hopes of any revitalised interest in a new Alien vs. Predator film and took a  couple of more months off his previous 14 months estimate before he starts shooting Alien: Covenant 2 (Alien: Awakening?):

“As for the future of the franchise, Scott thinks there’s a lot left in the tank creatively with screenwriter John Logan (‘Skyfall’, ‘Alien: Covenant’) already delivering a script for a direct sequel that Scott aims to shoot after ‘All The Money In The World’ and ‘The Cartel’.

“I’ll probably be filming it within a year,” Scott says about the follow up to ‘Covenant’. “It’ll be out within a year and nine months. It’s weird when you’re writing, doing, planning, thinking about franchises, it’s amazing how it opens up and starts to evolve.”

On whether that film, rumoured to be called ‘Alien: Awakening’, will complete the prequel series and lead us directly up to the events of the 1979 ‘Alien’, Scott remains coy. “I don’t know. [I’ll make] maybe two more [films], or maybe one more, I don’t know.”

Thanks to the Perfect Organism Podcast for the news! Keep a close eye on Alien vs. Predator Galaxy for the latest on Alien: Covenant and Alien: Covenant 2! You can follow us on Facebook, Twitter and Instagram to get the latest on your social media walls. You can also join in with fellow Alien fans on our forums!

Related News Posts
“I think AI is Becoming Much More...
Ridley Scott Reminisces Alien for 40th...
Ridley Scott Admits Cuts Were Made
There Is No Completed Script for Alien:...
Alien Covenant Reviews Roundup!