Today is September 30, 2011 which means that Aliens Infestation has been officially released in Europe. The game is available for the Nintendo DS and has been developed by Wayforward in association with Gearbox Software. It’s an action-packed, platform shooter with a hardcore, retro feel and a deep storyline that combines elements from the upcoming Aliens Colonial Marines game and William Gibson’s unused script for Alien 3. Players are able to recruit and play as 19 different marines, each with their own unique dialogue, and explore iconic environments including the Sulaco, the Derelict ship, and LV-426. 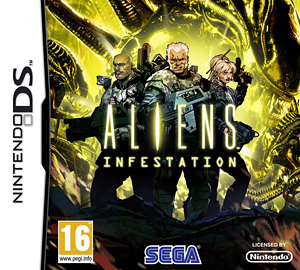 Let us know what you thought of the game in the Fan Reviews thread. If you’d like more information on the game you can check out our interview with WayForward and all three developer diaries from SEGA (1, 2, 3). Aliens Infestation launches in North America on October 11, 2011.