The second Aliens based to be released by publisher Sega is due out at the end of September. We recently spoke with developer WayForward (with some fantastic contributions from our community) regarding the upcoming game, Aliens: Infestation. Infestation will be released on the Nintendo DS and will be the first Aliens-only game release in 5 years.

AvPGalaxy – Thanks for doing this interview. First off, tell us about the origins of Aliens: Infestation. How did WayForward come to be working on the title?

Adam Tierney (director, WayForward) – Gearbox was already working on the console game “Aliens: Colonial Marines,” when they and Sega began looking for a studio to develop the handheld counterpart. Based on our work on Contra IV, they felt we were the right guys for the role.

AvPGalaxy – How long has the game been in development?

Jeff Pomegranate (producer, WayForward) – It began with a pitch in late 2007, but development didn’t begin in earnest until early 2008. We spent a good portion of 2008 on the title, but then cut back pretty drastically until this year. Better late than never. 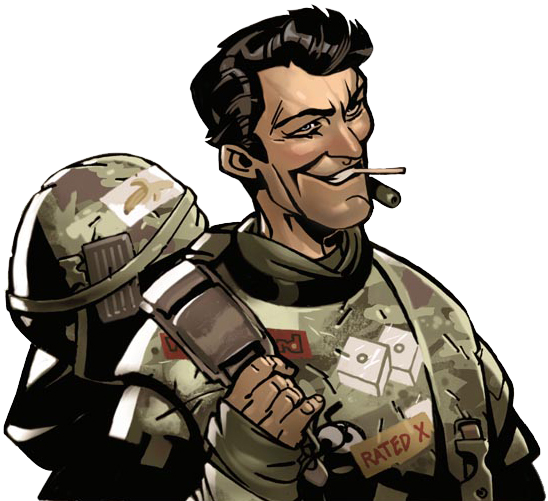 AvPGalaxy – When we first learnt of the game, it appeared to be a handheld version of Aliens – Colonial Marines. What involvement has Gearbox had in the development of Infestation?

Jeff Pomegranate – The folks over at Gearbox provided loads of support. We worked very closely with them early on in order to keep some continuity between SKUs, and more or less maintained that level of collaboration throughout. They’re a very skilled and knowledgeable group and we really a lot of fun to work with. I’m not sure who else would send us a bunch of Shiner Bock as a signing bonus.

AvPGalaxy – Can you give us a slightly more detailed description of the game’s story? Is it related to Gearbox’s Aliens: Colonial Marines game in any way?

Adam Tierney – Infestation is a side-story to that of Colonial Marines. We share characters and plot lines between the two adventures, while focusing on different squads and missions. Players that pick up both titles will appreciate little nods in our game to Colonial Marines, but the story also holds up on its own.

AvPGalaxy – Confirmed locations are the Sulaco, LV-426 & the Derelict. Will we be given the chance to explore any new and original locations in the game?

Adam Tierney – The primary locations are the Sulaco, LV-426, the Derelict ship, the Phobos research facility, and a few other minor locations. But believe me when I say they’re pretty massive, especially the Sulaco. We worked off schematics of that ship from James Cameron’s film to make a full 1:1 scale Sulaco, with every inch of it explorable (including the exterior). So as you navigate around, you’ll come across sleep chambers, mess hall, showers, gym, atrium, loading docks, reactors – literally everything you would expect to actually find on that ship.

AvPGalaxy – The press release for Infestation mentioned the Expanded Universe and how Infestation fits into it. Did WayForward look at the comics and previous games when developing Infestation? Or rather the movies?

Adam Tierney – The game ties most directly into the movies Alien, Aliens, and the Colonial Marines game. However, during development we looked at the old Dark Horse comics, and all previous Aliens videogames for inspiration. There isn’t a direct tie-in to those works, but you might notice an influence here and there.

Jeff Pomegranate – One of the things I have to commend our teams at WayForward on is their exhaustive and comprehensive research on all of our titles, and this one in particular. Of course, it’s a lot easier to spend an inordinate amount of time with a property when it’s something like the Aliens franchise, but even amongst its lesser appreciated ventures, the team didn’t shy away from due diligence.

AvPGalaxy – Will we be seeing elements of the existing Expanded Universe within the game?

Jeff Pomegranate – Without giving away too much, yes, yes you will.

AvPGalaxy – Talk us about the new Alien types in this game. We’ve seen the Space Jockey, ‘Rhino’ and a ‘Gorilla’ Aliens. What else can we expect in regards to new Alien designs?

Adam Tierney – Well technically, it’s not the Space Jockey. That guy’s fossilized. But you can see in the first film a massive exit wound from its chest, so it should be pretty easy to figure out where that creature came from. As far as enemies, we have xenos of the Ridley Scott variety, of the James Cameron variety, face huggers, eggs, chest bursters, androids, replicants, and several other surprises (both standard enemies and massive bosses).

I don’t want to give away everything just yet, because a lot of it is revealed as the plot unfolds. But we did our best to throw everything and the kitchen sink into this game, in terms of what you can fire your pulse rifle at. 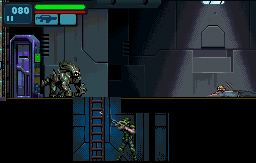 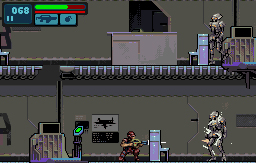 AvPGalaxy – Some may consider the Nintendo DS a less serious gaming platform. Has this resulted in more liberties, that some wouldn’t consider serious, being taken for the game?

Adam Tierney – I think it actually allows us to get away with more. We have ‘close encounter’ moments between the xenos and humans, where the two characters lock into a grapple, and you have to button-mash your way out of it. Failing those moments results in some of the most violent animations we’ve ever produced. But since it’s conveyed through tiny pixel characters, it’s somehow less offensive.

Jeff Pomegranate – I think any liberties we may have taken were geared towards serious gaming and serious gamers. Also, our genuine respect for the Aliens franchise prohibited us from doing anything to detract.

AvPGalaxy – Chris Bachalo, who is in charge of the character design for this game, is a notorious comic artist. Are there any plans to release a comic book to accompany the game?

Adam Tierney – I’ve been a huge fan of Chris Bachalo since I was a teenager, and we worked with him previously on an X-Men game. His style just seemed perfect for this title. We gave Chris very short descriptions for each of our 20 marine characters, and he went to town creating the portraits that you see in-game. It’s some of my favorite game art we’ve ever had the pleasure to be involved with.

I’m not aware of any plans for a comic, but I do think it’s a great idea!

AvPGalaxy – Will we be seeing any movie-inspired characters in the game? What about cameos?

Adam Tierney – There’s tons of fan service, but no actual cameos, because the timelines of this game and the films don’t quite match up. What you’ll see more often is characters in our game that mirror those from the films. So while we don’t literally have Hicks or Hudson or Vasquez in the game, we have characters with similar personalities that essentially stand in for them (while being fully-developed themselves).

AvPGalaxy – It’s been confirmed that we will be able to switch between characters during the game.  How does this feature work exactly?

Adam Tierney – There are 19 marines in the game (20, including your CO). And basically, these marines work as your lives. You begin with 4 marines, and you can switch between them in save rooms. When one marine dies, another takes his or her place. As you play through the game, you’ll encounter 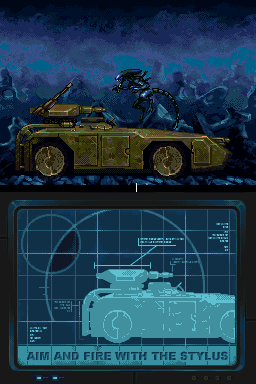 additional stranded marines. If you still have a full squad, they’ll greet you but won’t leave their post. However, once you’ve lost a marine or two, they’ll join you on your adventure. So essentially, the player has 19 lives to beat the game in, if they can find all the marines. There’s also a Pokedex-style roster that keeps track of which marines you’ve encountered, and which you’ve let die.

We were really influences by James Cameron’s film, in which he made great effort to create memorable, loveable characters, then one by one killed them all off. And that’s exactly what we’ve done here as well. Each character has their own unique name, portrait, personality, uniform colors, idling animation, and all dialogue is completely rewritten (19 times!) based on who you’re playing as at any moment. We wanted players to really get attached to these characters, so that when they died, they felt tremendous loss. Because in this game, dead means dead.

That said, there is a difference between being killed and being captured. If your marine is defeated by xenos, then instead of being killed instantly, they’re taken to one of the hidden hive rooms (where the queen lays her eggs). Your CO will radio you shortly after their capture, and let you know that he’s getting a signal from their beacon, which is added to your map. If you can get there in 3 minutes or less, you save your marine and they rejoin your squad. If you take longer than 5 minutes, they die and the signal is lost. If you take between 3 and 5 minutes, you save them but they talk about ‘feeling sick’. Any fan of the Aliens series can probably guess what next…