A new image of the Predator fighting the Predalien has surfaced. This photo is taken from a german movie magazine. 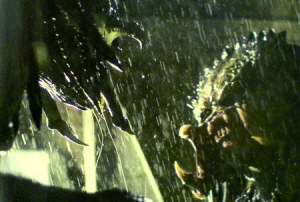 It looks to be from the scene in which a previously released still takes place. You can see the entire image here. Doesn’t look like there is much difference between this and the AvP Predators unfortunately. The skin seems a bit yellower but the the face still looks as rubbery. Big thanks to German Predator for scanning this in.