Blackfilm.com has just released a new picture from the upcoming AvP Requiem: 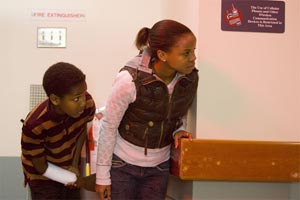 The picture doesn’t show any new scene or any of the creatures, it’s just the two mostly unseen actors – Shareeka Epps and Meshach Peters who play Kendra and Curtis respectively. Would seem Curtis has been injured. Thanks to dDave for the news.