This is some interesting news. Dave Dorman, you remember him? He’s a great sci-fi illustrator/painter (check out Aliens: Tribes). He was also one of the first people to design a Predalien. According to a post on his blog, he actually offered to work on AvPR but he was turned down!

“I was hired by 20th Century Fox/Dark Horse Productions to develop some Predalien creature designs for the (then viable) first incarnation of Aliens v Predator. I did a number of designs, including the one shown here. Well much to my surprise here I am looking at my designs, in the flesh, so to speak! I have posted here my original designs and the photos showing the quite distinct similarity!… Last year I had approached the filmmakers about doing some design work for them. While they were familiar with my work they declined to have me involved. Now I know why!” 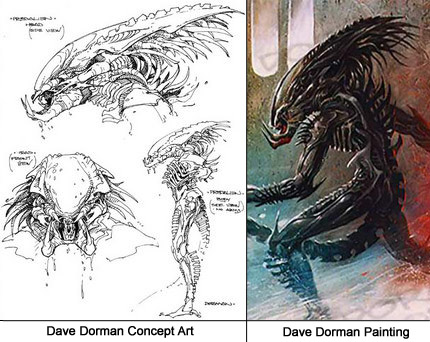 He goes on to point out the similarities between his design (seen above) and ADI’s version. Essentially, it’s about credit. But while the designs have some similarities, there are lots of differences too. But either way, I can’t believe he was turned down. Thanks to Sabinator and Xenomorphine for the news.