The marketing campaign has officially begun! IGN have got their hands on a new production still from AvP2 that features the Predalien fighting with the Predator! 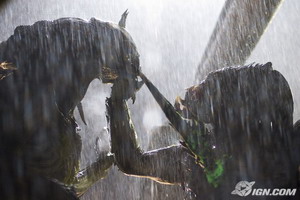 Looks absolutely amazing. Looks as if the Predator has an alien’s tail through its chest as well and the Predator has impaled the hybrid with its wristblades. Special thanks to The Ultimate Predator for the news.