Alien Covenant had its premiere in London’s Leicester Square last night and despite some technical difficulties with the live stream, we managed to see some of the stars hit the green carpet. In attendance was Ridley Scott joined by many Alien Covenant actors including Michael Fassbender, Katherine Waterstone, Billy Crudip and Danny McBride. 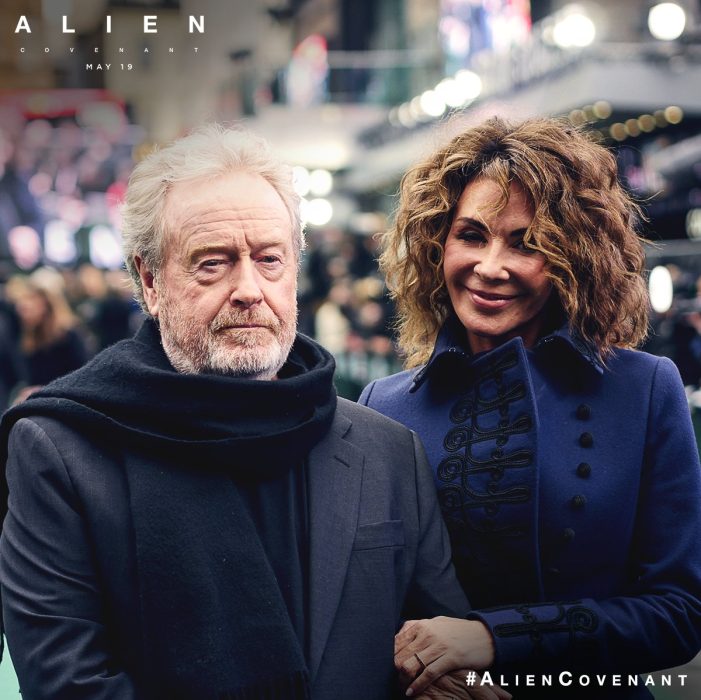 Here’s a select few tweets from fans and journalists who were lucky enough to see Alien Covenant last night. From what I’m hearing the vibes are generally quite positive; people are finding it scarier than Prometheus; the cast and characters are good but the film isn’t without its problems. Particularly regarding the Alien mythos and what was already established in Alien and Aliens.

Well, a little overwhelmed, #AlienCovenant is more of the same and yet I loved it. Thank you for the evening @20CenturyFoxUK @AlienMoviesUK

So lucky to go to the #AlienCovenant premiere great intro from the cast. Definitely a thrill ride and super gory pic.twitter.com/OvdZmT11pX

#AlienCovenant is definitely better than Prometheus, bringing back the needed horror into the franchise. Deadly beautiful and mysterious

Just out of Alien Covenant… it has been marketed as a more Alien like film… it's actually a straight sequel of Prometheus, very much so

Scared out my nut, jumped wayyy too many times out my seat, add The fact I had my teeth clenched 😬through the whole film too #AlienCovenant

Alien Covenant is fantastic and fun and scary #RidleyRules pic.twitter.com/lwVHXjLprn

Was at the premiere of Alien covenant tonight. Scary stuff! Very good out of very good. Need to… https://t.co/MJ02fJLi8t

@jonah_salomon_ @AlienAnthology I very much did! Can't say too much because of the embargo but it's very dark, very bloody and very Alien-y; hope you enjoy! #AlienCovenant

Quint from Aint It Cool News:

#AlienCovenant is an intense, strange and nightmarish continuation of the franchise. A great companion to Prometheus & the Alien mythos.

I don’t think everyone will love Alien: Covenant. Some will probably hate it. It’s a complex film and one you’ll be talking about after.

So alien covenant. Goes as you'd expect, but the execution is messier than you'd think.

And of course our own Aaron Percival was at the premiere last night and saw the movie. You can see his initial reactions below:

Keep an eye out on Alien vs Predator Galaxy on Sunday morning as we will have our roundup of all the web’s Alien Covenant reviews as well as our own review.