Fox have now announced that in addition to their 20th Century Fox World theme park and resort being constructed in Malaysia, they will also be building another park in Dubai.

“Add Fox to the growing list of Hollywood studios that see expanding opportunities in theme parks, especially overseas. It announced this morning plans to introduce a park and resort — 20th Century Fox World, Dubai — in 2018 as part of a deal with Al Ahli Holding Group.

Attractions will be based on Fox properties including Ice Age, Rio, Planet Of The Apes, Aliens, Predator, Night At The Museum, Titanic, The Simpsons, and Sons Of Anarchy.

This will be the studio’s second theme park; one in Malaysia is now scheduled to open in 2017. But Dubai will have the first Fox-branded resort. The arrangement with Al Ahli provides for up to three additional Fox-branded resorts outside Dubai.” 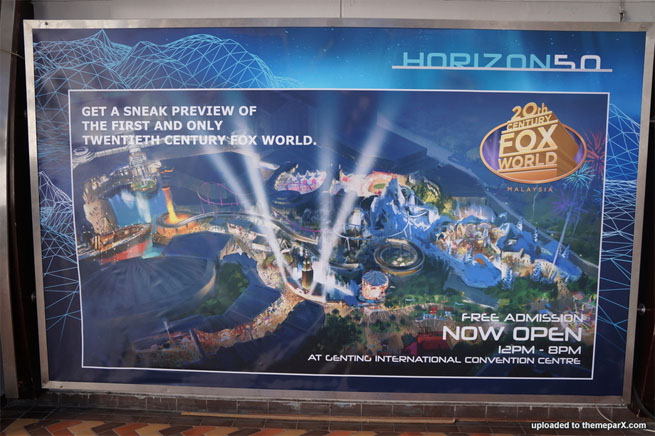 A sneak peek for Gentings, Malasyia shows a Derelict ship. Picture via themeparx.com

Specific details of the rides are unknown but is has been reported on numerous occasions that Alien/vs/Predator themed attractions will be there. A sneak preview for the Genting, Malaysia park even shows a massive Derelict ship. The opening of the Malaysian park is currently scheduled for 2017, a delay from the of 2016 as previously announced. The Dubai resort is due to be opened in 2018.

What do you guys think? Are you planning on going to 20th Century Fox World? Thanks to Willie Goldman of Aliens Collection for letting us know.