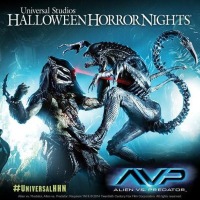 To celebrate Alien vs Predator‘s 10th anniversary, 20th Century Fox and Universal Orlando Resort and Universal Studios Hollywood have teamed up for the yearly Halloween Horror Nights event to launch a maze based around Alien vs Predator. It’s essentially a theme park-style attraction based around various franchises. Like the Alien War attraction a few years ago. The one in Orlando is based around a Weyland-Yutani research facility where people are caught in a battle between Aliens and Predators. The one is Hollywood will be different and will feature a crashed Predator spaceship with xenomorphs on the loose – similar to the premise of 2007’s AvP Requiem.

In Universal Orlando’s spine-chilling maze, guests will find themselves thrust right into the middle of the primordial battle between the Aliens and Predators as they visit one of Weyland-Yutani’s secret facilities to assist with a situation that has surfaced. Communication has been lost with a bio-weapons research facility in Central America which houses many divisions dealing in extra-terrestrial technologies, specifically the Alien Xenomorph species. Pieces of transmissions were received detailing that the facility has become compromised and another alien species called Yautja – commonly known as Predators – are hunting both the Xenomorphs and any human presence found. Guests will have to navigate through the labyrinth of destruction within the facility as they struggle to survive the ancient feud between these two deadly species.

The terrifying new “AVP: Alien vs Predator” maze at Universal Studios Hollywood will answer the proverbial question asked by mankind since the beginning of time: Are we alone in this dark, vast universe? “AVP: Alien vs. Predator” will once and for all shed light on the answer when it brings to life the violent creatures cohabitating our world as it pits two rival alien species in a fight to the death with Earth as their battleground. This menacing maze will uncover a dangerous alien spaceship carrying a race of hunter aliens known as Predators and a threatening new alien life form that uses human hosts to propagate its species. After crash landing in a remote section of America and escaping to the countryside, the alien and predator become hunter and prey with guests caught in the crossfire.”

Universal have also got assistance from special effects duo Tom Woodruff and Alec Gillis from Amalgamated Dynamics and they have allowed the team to cast from the molds of the creatures they used for the AvP movies. Halloween Horror Nights takes place in Orlando, Florida and in Hollywood, California between September 19, 2014 and November 1, 2014. You check out the promo trailer below:

Thanks to RazorSlash and Aliens Collection for the news.