If you’ve been following Alien vs. Predator Galaxy over the last few months, you should have no doubt seen our coverage of Alien: Escape, an Alien: Covenant themed “immersive experience” from Madam Tussauds London that we’ve been really looking forward.

Yesterday, Madam Tussauds opened their doors after hours to let the press in for a look at just what Alien: Escape is and now they’re able to show everyone what is in store for visitors!

“Today, Madame Tussauds London unveiled its brand new immersive Alien: Escape experience, set to terrify willing guests this summer. Generations have watched the iconic film franchise and now, thanks to the London attraction, brave wannabe crew members can step on board the Covenant ship and come face to face with the Xenomorph opening Saturday 15th July.

Created in partnership with FoxNext Destinations, the new experience follows the release of the critically acclaimed blockbuster film, Alien: Covenant and challenges guests to navigate a trail of blood, gore, chaos and danger. The mission is simple: Run. Survive. Escape.

Hollywood heavyweight Michael Fassbender’s first wax figure, in character as next generation Weyland-Yutani synthetic Walter, will join courageous guests on their gruesome quest. The multi-sensory fright-fest will also take some of the most infamous and petrifying sci-fi creatures ever to hit our screens and place them in front of guests in all their heart-racing and bloodcurdling glory. 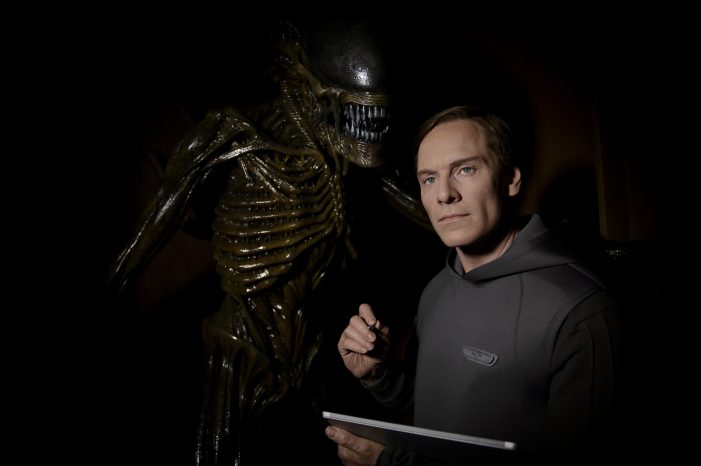 Madame Tussauds London has worked side by side with Creatures Inc., the genius design team behind the Alien: Covenant film, in the creation of the immersive experience.  The creative minds that helped celebrated director Ridley Scott to bring fear to screens across the globe this summer now bring a chillingly accurate experience to the world famous attraction, giving fans the closest imaginable Alien experience possible.

Creature Director at Creatures Inc., Conor O’Sullivan said: “Authenticity and fear have been the big focus throughout this process, working with Madame Tussauds London. All the creatures that fans would expect to see from Alien have been recreated down to the finest, horrifically beautiful detail. This is a chance for fans to step aboard the colony ship and interact with the aliens in a way never seen before. It’s all action and if you have seen any of the films, this will be a must see experience.”

Edward Fuller, General Manager at Madame Tussauds London, said: “This will be the most terrifying and exciting attraction experience in London this summer. Alien: Escape is not for the faint-hearted and will test even the bravest of guests with its multi-sensory horrors. Working alongside Twentieth Century Fox and Creatures Inc. we have meticulously and faithfully created a space that brings this icon of sci-fi cinema to life. For fans of the Alien franchise this is a once in a lifetime experience.”

Alien vs. Predator Galaxy was at hand to attend the unveiling! Alien: Escape was very much in the same vein as the old Alien War attraction, where you are led by several actors (2 of whom you can see in the last picture above) through several locations that are occupied by some very familiar waxworks! The sets were modeled after the Covenant and the Necropolis on the surface of Paradise. We will be recording a podcast and be publishing a page on the event shortly.

Alien: Escape opens to the public this Saturday, the 15th of July and admission to the event is included in all Madam Tussaud ticket packages. You do have to be aged 15 or over to go through Alien: Escape.