Corporal Hicks got the chance to interview music composer Brian Tyler about his work on AvP Requiem. He just finished recording the score last week and we even have some pictures of them recording the AvPR score. 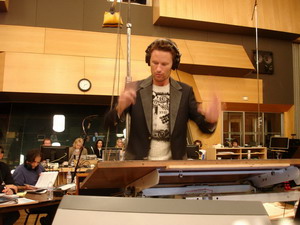 AvPGalaxy – How long did it take you to actually write the score…?

Brian Tyler – The great thing about this film is that we were all on the same page in what we wanted musically. We wanted it gritty, scary, adrenaline pumping, anxiety ridden, huge as well as quiet and creepy, epic, with a wide dynamic range. We wanted the score to reflect the tradition of the aliens and predators. So it was intensely hard work but in lock-step. The Brothers Strause, Fox, John Davis, Robert Kraft, Mike Knobloch, and the editor Dan Zimmerman were all awesome in pushing forward towards the same goal: let’s make this score kill!

The interview covers a lot of different areas about composing AvP Requiem as well as the processes involved in composing. Check the rest out here.