The Official PSP Guide Book did say they would have new details of this new AvP PSP game. Thanks to frost for taking some pictures of it. See this thread for more details. The game will be published by Sierra (who published AvP2 for PC) and developed by Rebellion (who made AvP1 for PC). 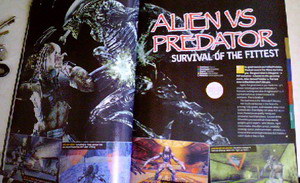 They’re only low-res shots. He will be scanning in the articles later. One picture has a caption that mentions the crashed Predator Ship. According to the article, it has lots of Facehuggers onboard as well as the Alien/Predator hybrid which are let loose when the ship crashes.

Update: frost has scanned the six pages in high-res. Check them out here or on the next page.

Update #2: thewolf has since updated the thread with a transcript of the article. Be sure to read it.