It is with great sadness that I am here to report that Roy Scammell, the stuntman best known for his work in the James Bond franchise but also one of only three performers to wear H.R Giger’s iconic Alien suit in the original Alien, has passed away. According to the Milton Keynes Citizen, Roy passed away at the Luton and Dunstable Hospital following an undisclosed short illness during the weekend.

“I am deeply saddened to announce the passing of my remarkable father. He was always such a role-model – and taught me that fear is just a word in the dictionary. He enjoyed the buzz of fear, the challenge it posed and he derived great satisfaction and kudos from his extraordinary performances. He always executed meticulous planning, leaving nothing to chance.

His incredible story will continue to inspire us all to face our fears, but especially the new arrivals in our family – his two great grandsons, Spencer and Archer, who are both already showing that Scammell action man attitude to life.” 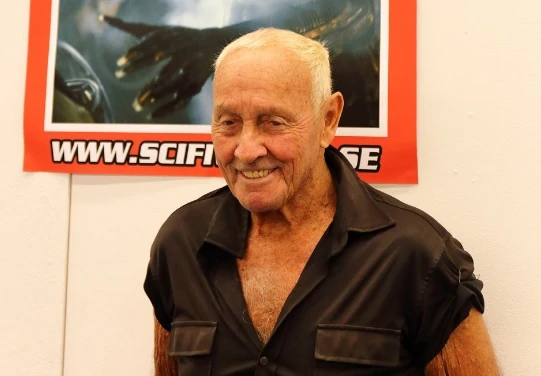 Picture via the Tardis Data Core

Alongside Badejo Balaji and Eddie Powell, Roy was one of three performers inside the Alien suit for Sir Ridley Scott’s original. All three have now passed away. Roy was responsible for filming the stunt work in which the Alien was ejected from the Narcissus during the climax of the film.

Roy was a regular at conventions in the United Kingdom and I once had the pleasure of meeting the man. He was an absolute gentleman. The thoughts of the Alien vs. Predator Galaxy staff and community go out to Roy’s family and friends. Rest in Peace, Roy.