Our very own Valaquen has written an extremely well-researched article on his Strange Shapes blog about the life of Bolaji Badejo. For those Alien fans out there, Badejo played the xenomorph creature in Ridley Scott’s 1979 Alien. He was born in Nigeria on August 23, 1953 and eventually made his way to England in the 70’s. He always had an interest in art design and studied graphic design in England. Badejo was in a London pub when he was spotted by a casting director working on Ridley Scott’s Alien. They wanted someone really tall and thin to play the part and 6’10” Bolaji Badejo was perfect for the role. Alien was the only feature film he was ever in and he more or less disappeared after its release and nobody knew what had happened to him. 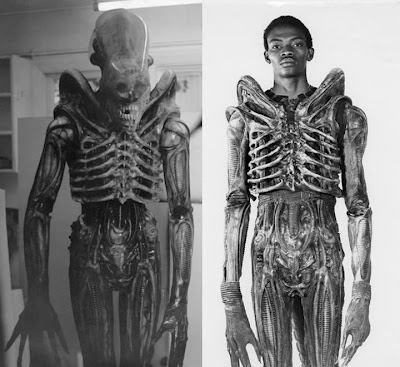 Valaquen managed to track down three of his family members who revealed that Badejo relocated back to Nigeria in 1980 and within three years, he had his own art gallery. His children, Bibi and Yinka, were born in the 80’s. Sadly, Bolaji Badejo died December 22, 1992, aged 39, due to sickle cell anaemia which he had been diagnosed with as a child. His memory will live on forever though for his fantastic performance as the xenomorph. Be sure to check out Valaquen’s article in full to learn more about his life.