First teased by Dark Horse back on Alien Day, Comic Book Resource has just officially unveiled a brand new comic series based on William Gibson’s first draft of Alien 3! Gibson, who has generally been reluctant to talk about his work on the film, had this to say about the upcoming adaptation:

“When your first contracted screenplay (or screenplay of any kind, in my case) isn’t produced, but the film is eventually made with a different screenplay, retaining nothing of yours but a barcode tattoo on the back of a character’s neck, the last thing you ever expect is to see yours beautifully adapted and realized, decades later, in a different medium, by an artist of Johnnie Christmas’ caliber,” Gibson said in a statement released exclusively to CBR. “It’s a wonderful experience, and I have no doubt that Johnnie’s version, which adheres almost entirely to the script, delivers more of my material to the audience than any feature film would have been likely to do.” 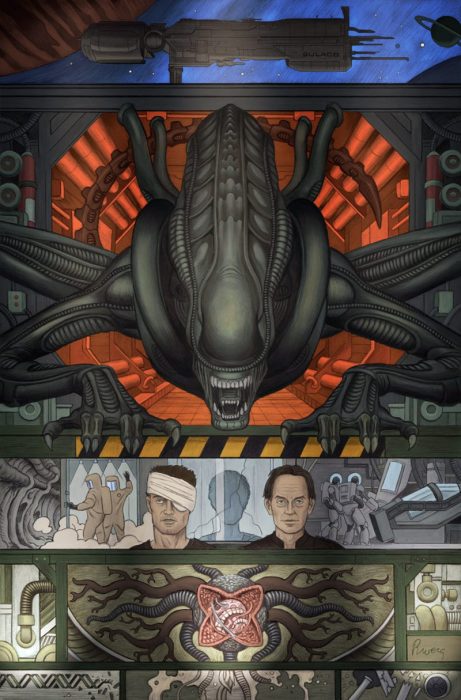 Like Dark Horse’s most recent Alien titles (Dead Orbit and Dust to Dust), William Gibson’s Alien 3 is written and illustrated by one talent: Johnnie Christmas of FIREBUG fame. Christmas has also worked with Dark Horse in the past, providing artwork for Angel Catbird and Murder Book.

Tamra Bonvillian will be providing colours for the series. You can check out the 5 page preview of their work in the first issue below!

The first issue (of five) of William Gibson’s Alien 3 is currently slated for release on the 7th of November. What do you think of the new series? Are you as excited as I am for this adaptation? Thanks to Whos_Nick for the link.