In a recent interview with The Toronto Sun Sir Ridley Scott spoke a little more about his thoughts on the Alien series when asked if Daniels and Tennessee would be returning for Alien: Covenant 2 (aka Alien: Awakening).

“I think they have to. There’s no reason why Alien should now not be on the same level for fans as Star Trek and Star Wars. So I think the next step as to where we go is, do we sustain the Alien (series) with the evolution of the beast or do we reinvent something else? I think you need to have an evolution on this famous beast because he’s the best monster ever, really.”

The Toronto Sun also asked him if the next Alien film was still on the cards. Scott responded that he “would like to; they’re crazy if they don’t. David is a fantastic villain. I love what (Michael Fassbender) did in Covenant. But it’s f—ing hard, dude. We lifted Alien out of a ditch and made Prometheus.” 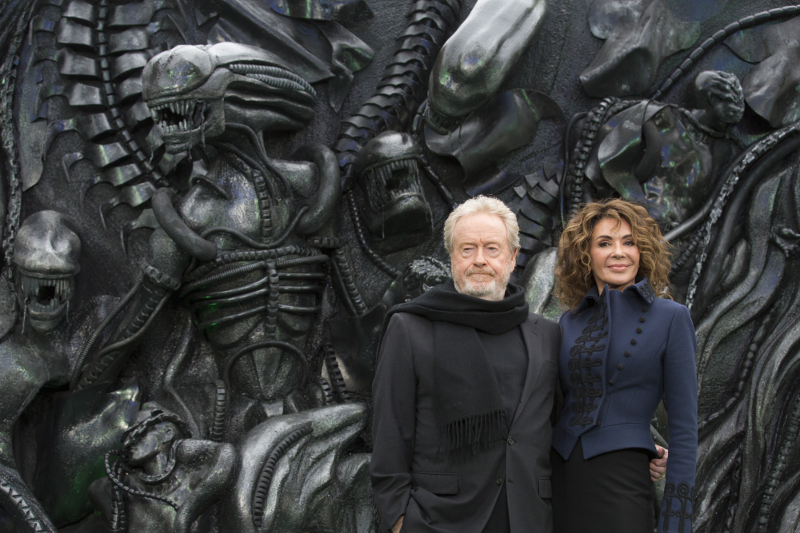 London UK : Cast and crew at the World Premiere of Alien – Covenant in London’s Leicester Square. (Credit: StillMoving.net for Fox)

A recent article from the folk over at Omega Underground states that 20th Century Fox had been serious about moving forward with Alien: Covenant 2 and had, at one point, considered a Summer 2018 for shooting.

According to HumanMedia, a member of the Blu-Ray.com forums who claims to have worked on Alien: Covenant, the sequel was originally scheduled to begin pre-production in September 2017 but was shelved after the tepid box office response to Alien: Covenant.

“The sequel to Covenant was originally due to start preproduction this month in Sydney. After the box office results filming was cancelled, and a warehouse storage unit full of stuff was auctioned off a few months ago. So the original plan of pumping out another quickly has definitely changed with no immediate plans for anything.”

Thanks to Daszkowski for the news. Keep a close eye on Alien vs. Predator Galaxy for the latest on Alien: Covenant and Alien: Covenant 2! You can follow us on Facebook, Twitter and Instagram to get the latest on your social media walls. You can also join in with fellow Alien fans on our forums!