The first screenshots from the upcoming Aliens vs. Predator 3 game have surfaced in a spanish magazine called Play-ManÃ­a. Not sure what specifics the article mentions but the game will be a first-person shooter. The aliens in the game are also based on the ones seen in Aliens with the ridged heads. 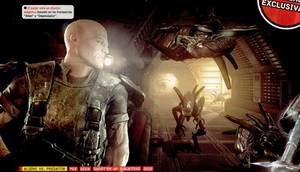 Here’s direct links to high-res versions of the scans: Page 1 & Page 2. Credit goes to Takhen for scanning the article.

Update: Another article can be found in Nuts Magazine [UK]. There’s a new picture plus it says a little about the game. The game is set 30 years after Aliens on an earth-like planet that has been colonised by aliens. There’s three species-specific single-player campaigns, as well as three-way Alien vs Predator vs Human online multiplayer modes.