The Alien trailer for Aliens vs. Predator has been released on Gamespot. The two-minute trailer shows off the fast and frantic gameplay of the aliens. Gamespot have also got four new Alien screenshots on their site as well as a short interview about the alien gameplay. 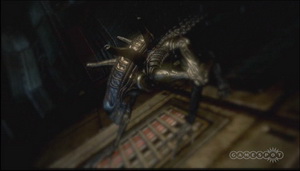 Thanks to Ikarop for the news.

Update: You can now watch the trailer in HD (88MB) and over 50 screencaps have been added to the Gallery.