Sega have released five new images from Aliens vs. Predator from the GamesCom convention. You can find all five images in the forum. 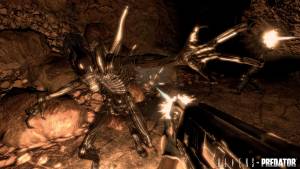 Two of the images are from a marine’s point of view with an alien attacking him. One image involves an alien holding someone down with a facehugger nearby. Another is of an Alien and Predator fighting and the final one is of a Predator and Marine fighting. Sega are also due to release some video interviews soon. Thanks to ikarop for the news.

Update #1: IGN have a new preview up and confirms some multiplayer details: “Up to 18 players are accommodated across all three platforms, and cross-species play will also be fully supported… A four player co-op skirmish mode is also included.”
Update #2: There are a few more AvP previews: EuroGamer, Nowgamer, VideoGamer and CVG
Update #3: The first video interview is available to watch on Sega.co.uk. You can also download it directly (19MB). The three-minute interview is with Darius Sadeghian who is a producer at Sega.
Update #4: Some more previews: VG247, G4TV, Gamespot, Gamepro and GamingUnion. Sega have also added a Community Interview with Tim Jones. Unfortunately, no footage was shown to the public at the convention, just to the press instead.
Update #5: Someone has added some cam footage of the Q&A Rebellion had with the press after the footage was shown. The audio is hard to hear but he confirms a few interesting things. A demo will definitely be released at some point; the singleplayer campaign is supposed to last 12-15 hours.