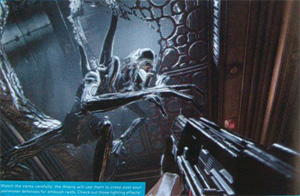 Check out the gallery for the scans. (GamePro and Total PC Gaming are on the first page, PC Zone on the second). There’s some new info if you read the articles. Rebellion mention wanting to do co-op multiplayer for example. Thanks to ikarop, Rimski and jayhy17 for the scans.

Update: Lone Warrior has posted a lot of details about the Alien gameplay which he found in PSM3 Magazine. There are scans further down the thread. You’ll apparently be able to detect enemies through walls using pheromones, for example.