November 2014 saw the release of Aliens – River of Pain, the third and final in a trilogy published by Titan Books. Written by Christopher Golden, River of Pain took us back to the weeks leading up to the fall of Hadley’s Hope, the aftermath of which we saw in Aliens. We spoke to Christopher prior to the release of the novel in October and now that we’ve had chance to digest and review the book, Christopher has taken some time to answer some of our follow up questions.

AvPGalaxy – First of all, thank you for agreeing to speak to us again, Christopher! Alien – River of Pain has been out for some months now and readers have had a chance to digest it. What do you think of the feedback and responses so far?

Christopher Golden – As always, there are some folks it’s not working for, but that’s true of every book. For the most part, the reception has been very positive. Even most of those who are troubled by the inclusion of elements they feel are breaking previously established canon seem to have enjoyed the book in spite of those objections. Most important to me, I loved writing it, and I know the editor and the folks at Fox were really happy with it. It’s the book I intended to write.

AvPG – From having spoken to your partners in crime, Tim and Jim, we know that Fox handed down brief outlines for the novels. What was yours? What did Fox need to happen in River of Pain?

CG – They wanted the prequel to ALIENS, telling the story of a group of Colonial Marines, scientists, and colonists, especially Newt and her family.  The premise provided by Fox included all of those things, and specifically laid out that the Weyland-Yutani scientists knew they were looking for something in particular. The premise supplied by Fox began by describing the book as “a novel of the Colonial Marines.”

There are lots of elements that were mine. The romantic history between Brackett and Ann Jorden, the friendship between Brackett and Newt, etc. A lot of things sprang from me working out the logic of certain things, for instance, if we introduce X, then Y would naturally result. The dynamic of Colonial Marines and how they fit with the Weyland-Yutani scientists…how all that worked…had to be figured out in the sense of what the company was doing at that point and who had operational control of the Colonial Marines in the field.

Also, several people have complained about the lack of communication between the company and the colony…completely ignoring the established time frame of interstellar communications. Those who are concerned about canon should also pay attention to established science within the ALIEN universe.

20th Century Fox specifically asked for the Colonial Marines to return for River of Pain.

AvPG – With how specific Fox have been with what they’ve wanted in the novels, how involved were they when it came to writing River of Pain?

CG – Other than providing the premise, approving my full outline proposal, and answering questions when I had them, not at all. But those three things are substantial and exactly what I’d hope to have from a licensor. The folks at Fox are great partners.

AvPG – One of the most obvious thing that readers have noticed is the inclusion of Colonial Marines in the story as their presence was never alluded to in Aliens. How did you decide how you were going to handle their inclusion in the story?

CG – Fox says they were there. You start with that and work backward. What would the dynamic have been with the colonists and scientists and Marines together? Bringing in Demian Brackett as someone brand new to the colony, seeing it from his perspective, allowed us to encounter the whole dynamic through his eyes. Given the established continuity of what Weyland-Yutani was doing, when they were doing it, what their political power was, etc., it all makes perfect sense to me.

AvPG – One of the biggest surprises for me came when you novelized sections from Dark Horse’s Aliens – Newts Tale. How did that inclusion come about? Was that something Titan wanted or was it all you?

CG – Again, logic. I’d never read that story before I started working on the novel. Then I discovered that it had been published and realized I had no choice but to include and extrapolate on the version of those scenes that are in “Newt’s Tale.” It’s official continuity, therefore I had to follow it.

AvPG – Was this something Fox told you? That Newt’s Tale was “official continuity” – or as people might know it more commonly as – canon? They have never really commented on it until recently in regards to your trilogy – and Aliens: Colonial Marines.

CG – Not at all.  But nothing has been done subsequently to revise that continuity, therefore in my mind it’s still official until someone says otherwise.

The cover art for Aliens – Newt’s Tale, provided by the talented John Bolton.

AvPG – That wasn’t the only tie-in with Dark Horse you included. River of Pain also ties in very briefly with their current Fire and Stone story. How much did you collaborate with Chris Roberson and Scott Allie?

CG – Actually, that was a weird one. After I’d already written the novel, we got the heads up about what Dark Horse was doing. My editor at Titan, Steve Saffel, got in touch and asked me to coordinate with Chris Roberson to make sure that the events of the novel did not conflict with the events of the comic, and to establish the characters from the comic in the novel. The way I’d originally written it, nobody else could have escaped. I had to create space for Chris’s characters to get off of Acheron. I’ve known Chris for years, so it was easy to get in touch, bang out a solution, and include it.

AvPG – Another aspect of River of Pain that reminded me of the Dark Horse comics was you having Brackett and Louisa survive at the end. It seemed very similar to the feel of Wilks and Billie from the first three Aliens comics. Was this deliberate?

CG – Nope. I read those comics when they were first published and haven’t read them since. (Wait, you mean the originals from way back, right?) In any case, nope. I couldn’t have Brackett go through the horror of losing Ann and Newt and then just leave. Saving Louisa gave him a tiny win in the middle of his grief, this young life, a friend of Newt’s. And yes, it sets up for the possibility of someone else using those characters in the future—survivors of Acheron.

AvPG – An aspect of River of Pain that I really loved was the focus you put on the difficulties of the frontier life. This wasn’t something that was ever really alluded to in other literature. What made you explore this in the novel?

CG – If you’re going to do a novel about colonists out on the fringes of the explored universe, desperate people who are starting over in life and will probably never get back to Earth, there’s no other way to do it. It’s very much a frontier mentality. It’s dangerous and lonely and probably maddening to think that if something goes wrong and you die, you’re dying so far from home. 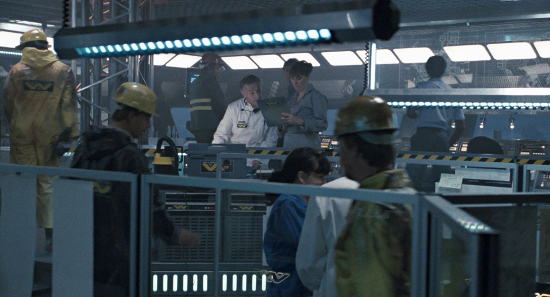 The hardships of the frontier life was something I thoroughly enjoyed in the novel.

AvPG – Something I would really have loved to have seen more of was Newt’s time alone prior to Ripley’s arrival. With Alien Isolation making such a huge splash with that kind of narrative, I would have imagined Fox might have pushed for it. Was this ever considered?

CG – Nope. I had no interest in writing a whole bunch of chapters about a little girl alone in a maze full of monsters. That’s a different book and, to my mind, not at all interesting when you know exactly how it ends. With the introduction of Brackett and the scientists and other characters, readers think they know that everyone dies, but they don’t know…and in fact, a handful of characters survive.

Writing the narrative you’re talking about, knowing that Ripley and Gorman and the others will arrive soon, would have bored the crap out of me and the readers, because there are no surprises. No suspense. Also, that wasn’t the remit from Fox. It wasn’t the novel they wanted.

AvPG – Was there anything that you ultimately had to remove from the book during editing?

CG – I’m sure there were plenty of small edits, but I assume that’s not what you’re asking. I can’t think of anything significant.

AvPG – Having had time to see the response to the novel, is there anything you would go back and amend in River of Pain?

CG – Well, there is one big continuity error and some character choreography that I’d like to fix, but it’s too late for that, so I’m certainly not going to point it out. :)

CG – Only to say thanks for reading, and check out my original novel TIN MEN, out in hardcover from Ballantine in June!