Although released second, Aliens – Fire and Stone takes place first in the Fire and Stone series. So it seemed only right that the first writer we spoke to from Dark Horse’s recent multi-series event was Chris Roberson, the man behind Aliens.

AvPGalaxy – Thank you, Chris, for taking the time to answer some of our questions. Aliens – Fire and Stone finished its run at the end of 2014. What have you been up to since you finished working with Dark Horse on Aliens?

Chris Roberson – I’ve usually got a few irons in the fire. Lately I’ve been working on Doc Savage for Dynamite, and a few different Dark Horse projects that haven’t been announced yet (but which are REALLY cool).

AvPG – Did you keep track of the response to the series? What did you think?

CR – A lot of comic creators avoid reviews and criticism of their work, but I’m of the type that always seeks it out. So yeah, I paid pretty careful attention to the response, and was pleased that a lot of readers seemed to enjoy it. 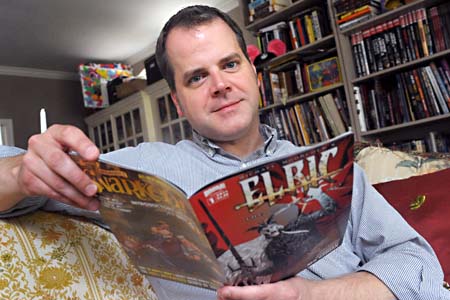 AvPG – You first joined the literary world with writing novels. When did you first decide you wanted to become an author and how did that eventually filter across to writing comics as well?

CR – I knew that I wanted to write comics first, since I was 8 years old, and it only took me another 30 years or so to pull it off. I became a novelist along the way, but comics were always my first love.

AvPG – The Aliens series is rich with talented individuals, from the terrifying designs of H.R Giger, to the strange yet wonderful soundtrack of Alien3 from Elliot Goldenthal. The Alien films are a seminal part of cinematic history. Which of the films if your favourite and why?

CR – The original is my absolute favorite, but Aliens is a pretty close second. They’re both pretty much flawless.

AvPG – Do you remember the first time you ever saw an Alien film?

CR – It was Alien, on cable sometime in middle school in the early 80s. I was WAY too young to be watching it, to be honest!

AvPG – As a long-time fan of the Alien series, how did you feel when Prometheus came out?

CR – I actually didn’t watch Prometheus until I’d been invited by Dark Horse to take part in this crossover, and so by the time I did see it for the first time I went in armed with the theorizing and speculation that the rest of the team had come up with. So while some viewers might have felt like the movie didn’t provide the answers that they wanted, I went in with a set of answers already in mind. And as a result, I liked it quite a bit!

AvPG – Are you also a fan of the Predator and Aliens vs. Predator films?

CR – I actually prefer Predator 2, but I’ve got a soft spot for the original as well. I didn’t see the AVP movies until recently, but I was a HUGE fan of the AVP2 first-person shooter game for the PC, if that counts!

AvPG – From what I understand, all the writers for Fire and Stone were brought together by Scott Allie and you were all quite familiar with each other and fans of the franchise. How did you divvy up the stories between you?

CR – I was brought on fairly late in the game, so I’m not sure how the other titles were divvied up, but when Scott invited me onboard it was specifically to write the Aliens title.

AvPG – A lot of recent media has been revising the history of the Alien films ever so slightly. Aliens – Fire and Stone obviously does that through the use of the Onager and their being survivors from the colony. What made it necessary to use revisionist history?

CR – Actually I’m not sure that what we’re doing would strictly be considered “revisionist,” in that we aren’t changing anything that happened in the original films. Instead, we’re telling a new story that fits into the gaps of the established narrative. But we took pains to make sure that nothing we did contradicted what had already been established. 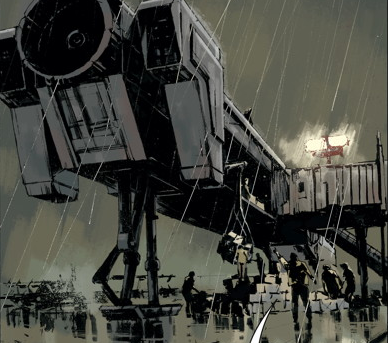 The Onager, an orbital cargo hauler, a small group of colonists use to escape LV-426.

AvPG – What made it necessary to tell that particular story though? Why did it need to be survivors from Hadley’s Hope?

CR – It was really just a mechanism to get xenomorphs from the moon seen in Alien and Aliens to the moon that was the setting of Prometheus, and them tagging along with a handful of Hadey’s Hope survivors turned out to be the simplest solution.

AvPG – And whilst we’re on the topic of the revisionist history, where did the idea for the Onager and that method of having survivors come from? Were any other options explored?

CR – There were MANY options explored, yes. The Onager ended up being the simplest and most elegant way to get our characters where we needed them to be.

AvPG – What kind of process goes into creating a story that revises the history? How do you make sure it fits in as easily as possible?

CR – The main thing we did was watch and REwatch and RErewatch the original films over and over again, taking careful notes. But I didn’t complain!

AvPG – Your Fire and Blood series overlaps slightly with Christopher Golden’s Aliens – River of Pain novel. From our chats with him, we know you two spoke about making sure both your stories worked together and that he had to accommodate your characters escaping LV-426. Did you have to make any changes to accommodate his novel?

CR – Thankfully, no. I was in the very early stages of working on our comic when I found out about Christopher’s novel, and so we were able to compare dates and details when I was still in the outlining phase.

AvPG – Dark Horse’s very first Aliens series found itself being contradicted by Alien 3 after the films release. From what I remember you guys worked closely with Fox to ensure it wouldn’t conflict with Prometheus 2. Did this result in any significant changes?

AvPG – You can give me more than that! Can you give me any specifics?

CR – I think that some of the things that we wanted to do veered a little too closely to what they plan to do with Prometheus 2, and so I’m afraid I can’t go into too much detail.

AvPG – Aliens – Fire and Stone, like some of the other Fire and Stone series, leaves the ending quite open. What exactly happened to Derrick Russell after those closing pages? Did he get to the Accelerant…?

CR – That is an excellent question.

AvPG – Is that “monkey” that Russell is experimenting on supposed to end up mutating into the even stranger creatures that are in Prometheus: Fire and Stone?

CR – I don’t think that there was a direct link intended, rather that the “black goo” was responsible for all of the various strange mutations that the characters encounter, and through Russell we were able to show that link.

AvPG – One of our members, Morgoth, asks if you’re a fan of Cast Away? He felt as if Russell had a few “Wilson” moments with the probe.

CR – Oh, sure. It wasn’t intended as a parody or homage to Cast Away in particular, but it was impossible not to be reminded of those interactions when writing Russell’s scenes with Rover.

Main character, Derrick Russell, investigates the crash of the Prometheus.

AvPG – Perfect-Organism, another one of our members, wants to know if the intention behind the series and the living mountain that is a persistent presence throughout the series, was intended to be the proto-Alien/Deacon at the end of Prometheus?

CR – There is a definitive answer to this, but I’m not sure I’m allowed to say.

AvPG – One of our staff members, Master Chief, also wants to know if you fell victim to a Predator, would it keep your head as a trophy or skin you alive and leave your body hanging for others to see?

CR – Oh, I’d totally want my head to be a trophy. That seems very flattering.

AvPG – You are the only writer out of everyone for the Fire and Stone series who didn’t get to write any of the core characters of the other 3 series. Would you have liked to? Was there anything you wanted to explore with those other characters?

CR – I actually enjoyed just being a consumer of those stories, and seeing what the rest of the team did with those characters. It’s nice to sit in the back seat and let someone else drive every once in a while.

AvPG – Now that the series is out and you’ve seen the responses, if you had the chance is there anything you would like to go back and do differently?

CR – I don’t think so. I think that Patric Reynolds and I told the story that we wanted to tell.

AvPG – Randy Stradley recently alluded to there being a second Fire and Stone series. Will you be returning?

AvPG – Thank you for taking the time to our questions. Before we sign off, is there anything you’d like to tell our readers?

CR – Just that we appreciate everyone checking out the books!

Be sure to head on over to Chris Roberson’s website and check it out!