May 2009 saw the revival of the Alien comics, soon followed by Predator. These are the first Alien and Predator serialized comics to come out of Dark Horse for almost 10 years. And the man behind the revival? Chris Warner, a veteran of the franchises and of Dark Horse’s involvement with them. We recently had chance to talk him. 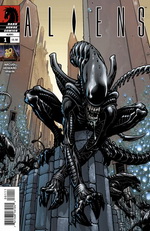 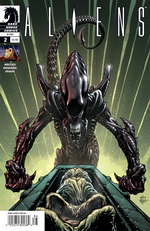 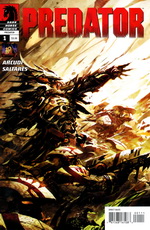 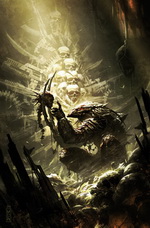 AvPGalaxy – Corporal Hicks here with Dark Horse’s Chris Warner. Thanks for agreeing to the interview, Chris. First off can you tell our readers what your role within Dark Horse is?

Chris Warner – I’m a Senior Editor, meaning I’m old. I sit around telling “back in the day” stories to our younger editors, who roll their eyes before getting back to Twittering on their iPhones.

AvPGalaxy – Now you’ve been involved with the Alien and Predator comics for sometime now. I believe your first work on the franchises was artwork on Predator: Big Game. How have you come to actually edit the Aliens/Predator line for Dark Horse?

Chris Warner – Actually, my first work on the franchises was drawing the first issue of Predator that Dark Horse published. Those were the days, I gotta say, back when comics really sold well. Predator #1 sold like 175,000 copies, which in the current sales climate would easily be the hit of the year. Anyway, when Dark Horse decided to re-launch Aliens, Predator, and Aliens vs. Predator, I couldn’t pass up the opportunity to work on them again. They’re all a part of my creative DNA.

AvPGalaxy – News of the new Alien and Predator comics came in January with Aliens set for May and Predator for June. It’d been around 10 years since any Aliens or Predator comics had been released (discounting those few movie tie-in AvP comics). What made you decide to bring the series back?

Chris Warner – It was time, just that simple. May 2009 was the 30thanniversary of Ridley Scott’s Alien, and it just so happened that 2009 also had the 20th anniversaries of our first issues of Predator and AVP. Seemed like the perfect time to let the beasts out of their cages.

AvPGalaxy – Tell us a little about what you had to go through in getting the comics back in the air. I assume since you already had the rights to the comics that it wasn’t an overly complicated process.

Chris Warner – The most important thing was figuring out how we wanted to go about the re-launches, story-wise. Over the years, and through a variety of editorial pilots, the franchises had sort of roamed all over the landscape, and we needed to think hard about how we wanted these new series to play out. Through conversations with Mike Richardson and Randy Stradley, we determined the directions we wanted to pursue.

AvPGalaxy – Aliens #1 ranked 103 in the sales list for May, selling just under 20,000 copies. Predator #1 came in 128 with just over 17,000 sales. Is Dark Horse pleased with the financial progress the series is making and are they selling better or worse than you expected?

Chris Warner – Actually, both books sold much better than the numbers you mentioned once reorders were added in, but in this marketplace and economy, 20,000 sales is a hit. Plus, the long-term play is in the bookstores with collections, and we view this program in a long-term perspective. Honestly, were it not for the horrible state of the economy, I’m certain the books would have sold better, but we can’t worry about stuff that’s outside our control.

AvPGalaxy – One thing I’m curious about is the lack of subtitle in the comic titles. Why did you just go with the simple one word titles? To emphasize the reboot angle?

Chris Warner – Pretty much, yeah. We’ll likely come up with subtitles when we go to collection, which we eventually did with the original Aliens and Predator series.

AvPGalaxy – As I understand it, you did a variant cover for the FCBD preview and for Predator #1. What made you decide to join in on the art and will you be doing more work in the future releases?

Chris Warner – Actually, management suggested the Predator variant, since I drew the very first Predator cover, so this was kind of a fun shout-out to the original series. The image I used was also sort of a tribute to the first cover, a triumphant Predator with arms raised. The Aliens Day Free Comic Book Day variant just sort of happened when there was some crossed wires on when we needed the cover, and we ended up needing it in a hurry. I had a free weekend, so I stepped up to the plate and got it done.

AvPGalaxy – I’m curious about the stylistic choices made for the new series. In particular the new style Predator and the mandibles on the Aliens?

Chris Warner – Don’t really want to get into this too much right now”•suffice it to say that what’s up will become evident as the events in the books unfold.

AvPGalaxy – You finally revealed the new Aliens vs Predator series at SDCC. Three World War. We know John Arcudi is writing it but what else can you tell us?

Chris Warner – Actually, John won’t be writing the series after all, but luckily Randy Stradley will be, who wrote the original series and who, I think, has a better handle on AVP than anyone else. Randy was actually the first person I offered AVP to, and fortunately when John had to bow out, Randy stepped up. Much as I love working with John, I’ve wanted to work with Randy again on a series forever, since I honestly believe he’s one of the best writers in all of comics. And with Rick Leonardi pencilling, one of my all-time favorite comics artists, I think the series is going to kick ass big time.

AvPGalaxy – And why the subtitle for AvP when you didn’t have any for the other two?

Chris Warner – Both Aliens and Predator are leading into AVP, which has never happened before, so we see it as a major event. When Dirk Wood, our Director of Marketing, suggested the title, I just couldn’t not use it.

AvPGalaxy – The most recent AvP comics have been digest style novels – Thrill of the Hunt and Civilized Beasts. Will Three World War be serialized like the Aliens and Predator or be a digest novel?

AvPGalaxy – Thrill of the Hunt and Civilized Beasts all played very heavily on the AvP movies. And from the the artwork released, it looks like Three World War will be?

Chris Warner – Not really. The story takes place in the future, so it doesn’t have a direct connection to the AVP films. But there are definite tie-ins to our very first AVP series.

AvPGalaxy – If the rest of the series’ sales are as strong as the initial releases do you foresee future series?

AvPGalaxy – How soon after the series’ conclude can we expect a TPB?

AvPGalaxy – You were also involved in editing the recent Omnibus releases. What made Dark Horse bring all the old comics back? Was it a pre-emptive strike before the new series?

Chris Warner – We’re very proud of the library of stories we created for Aliens, Predator, and AVP, and we felt it was time to get everything back into print in quality, value packages and to collect the stories that we’d never gotten around to collecting. The impending new books made getting the older material out even more important, but we would have gone through with the Omnibus program even if we hadn’t decided to publish new material.

AvPGalaxy – And it seems a number of short comics where also left out of the Omnibuses. Was there any particular reason for this?

Chris Warner – Anything left out was unintentional (with the exception of the company crossovers)–there have been so many stories appearing in so many places over so many years under so many different editors and managerial regimes that it was inevitable that something would get left out. Unfortunately, back in the day we were a small company feeling our way through the publishing worlds, and we didn’t keep records as well as we do now. Anyone out there can feel free to let me know what we’ve missed, and we’ll make efforts to get them into new editions of the appropriate Omnibus volumes.

AvPGalaxy – The Alien franchise itself is synonymous with artistic talent. How did you go about choosing the artists for the new series, especially given some of the talent who had come before. I imagine it to be a daunting task?

Chris Warner – Choosing an artist for any series can be tough, but that’s what comics editors do. I’d worked with Zach Howard before, on the creator-owned Outer Orbit, and I love his work. I thought he’d do an amazing job on Aliens, and I was right. His commitment to the storytelling and his eye for detail are really impressive. Javier Saltares had done AVP for us back in the day, as well as a memorable run on X, and I’ve always admired the explosive action of his approach. We intended Predator to be more of an action-oriented series (with Aliens focusing more on horror), so I thought Javier would be a solid choice, and he’s done a great job.

AvPGalaxy – Thanks for the interview, Chris. And as tradition, are there any last words you’d like to say to our readers?

Chris Warner – I’d like to thank all the readers who’ve responded so positively to the books, and I think you’re going to like what we’ve got coming.