At the start of 2014 Titan Books began to release their trilogy of Alien novels, the first since Dark Horse Press wrapped up their run in 2008. November sees the release of River of Pain, the third and final book in this particular trilogy. Over the past 11 months we’ve sat and talked with Tim Lebbon and Jim Moore about their respective novels and recently Christopher Golden took the time to sit down and answer some of our questions about his novel.

AvPGalaxy – Thank you for taking the time to answer our questions, Christopher. Before we start, for those reading this interview that might not be aware of you, can you tell our readers a little bit about yourself?

Christopher Golden – My first novel, OF SAINTS AND SHADOWS, came out in 1994, and I’ve written all kinds of things in the twenty years since then, including comics, video games, and short stories.  Though my main focus is always on my original novels (like the recent SNOWBLIND and next year’s TIN MEN), once in a while an opportunity comes along to write a media tie-in novel that I just know the fifteen-year-old I once was would be furious if I turned down.  When that happens—as with X-MEN, BUFFY THE VAMPIRE SLAYER, and HELLBOY in the past, and SONS OF ANARCHY right now—I can’t say no.  Doing that would be a betrayal to the passions that led to this career.  So when Steve Saffel at Titan told me about this ALIEN project, well…you can imagine.

AvPG – When did you first decide that being an author was what you wanted to do?

CG – When I was in high school, I thought I wanted to go to film school.  I was already writing fiction then, but I just had movies on the brain.  I decided I would go to graduate school for film, that the smart thing would be to get the best education I could from the best university I could get into, and so I went to Tufts University in Massachusetts.  I love my alma mater!  While I was there, I took semester after semester of creating writing classes with two excellent professors, Alan Lebowitz and Jay Cantor.  They were literary guys, but they never disrespected my desire to write genre fiction.  During my senior year, I was reading John Skipp and Craig Spector’s novel THE LIGHT AT THE END and something about their style made me realize that there was a place for me as a novelist, that I could make a go of it.  I started writing OF SAINTS AND SHADOWS the same week and never looked back. 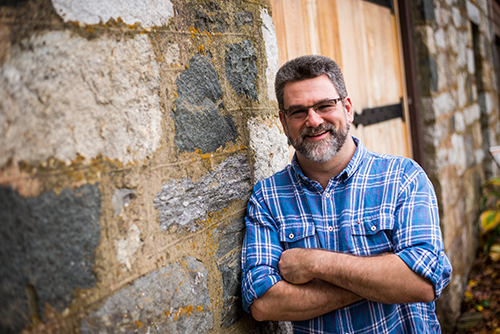 AvPG – The Alien franchise is considered to be a very influential franchise. It has influenced the works of many others that came after it. When did you first watch any of the Alien films and which would you say was your favourite?

CG – I can’t honestly say when I first saw ALIEN.  I would have been twelve when it was released, but it wouldn’t have been unreasonable to think I saw it in the theatre, despite its being rated R.  I’ve seen the film so many times, it’s hard to keep track.  I know I saw ALIENS in the theatre—I went at least four times—and of course I owned the VHS and later the DVD.  The extended version of ALIENS is absolutely my favourite of the films, which is a good thing, considering that so much of RIVER OF PAIN springs from the material in the extended edition.  I was living in New York when ALIEN 3 was released, working for the company that owned Billboard magazine and writing for something called the BPI Entertainment News Wire.  In that capacity, I got a pass to attend a press screening of ALIEN 3 and so I remember that one very clearly, having seen it before everyone else.  I can still remember my fury at the fate of Hicks and Newt.

AvPG – River of Pain is the third novel in the series and the first two have been written by good friends of yours. How did you decide that River of Pain was the novel you wanted to write?

CG – When Titan editor Steve Saffel told me the plans for the three books, I had two responses.  The first was that it made perfect sense for him to hire three writers who were friends (and shared the same agent).  The second was that as much as I loved Tim and Jim, I wanted to write this third book because, as you know, it’s a prequel to ALIENS, set on Acheron (LV-426).  As I mentioned, the material with the Jorden family in the extended version of ALIENS was very exciting to me, and I loved the idea of telling their story.

AvPG – I understand that Fox issued you all with short briefs about what your book needed to accomplish. Without spoiling the events of the novel too much, can you tell us a little about what you needed to achieve with River of Pain?

CG – Of the three of us, I had the least instruction and most leeway, simply because the big idea for my novel is fairly clear—tell the story of Acheron leading up to the events of ALIENS.  Of course I wrote a thorough outline that was vetted by Fox.  The challenge was to come up with an original story that would still have drama and surprises and mystery in it, even though every person reading it would already know at least a major element of the climax.  Here’s what I can tell you:  even if you’ve seen the movie a hundred times, you only know part of the story.  In RIVER OF PAIN, you’ll get the full picture of what unfolded prior to ALIENS.

AvPG – As River of Pain takes place before the main events of Aliens and includes Colonial Marines, would you say that your novel is more akin to Aliens in feel?

CG – RIVER OF PAIN is composed of a number of elements.  There’s a science team from Weyland-Yutani, the Jorden family, relationships that may surprise you, and yes—Colonial Marines.  It’s certainly got a lot in common with ALIENS both in plot and tone.  Given the story I’m telling, it had to, and to me that was the best part of writing it. 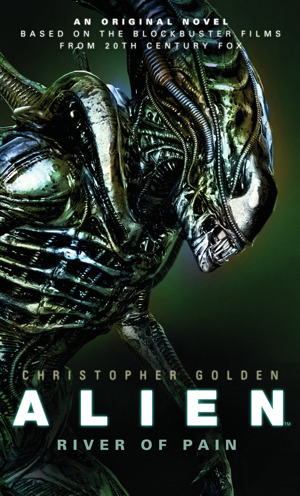 AvPG – From the descriptions of River of Pain released so far it would seem that the Derelict ship plays a large part in the story. Did you take much inspiration from Ridley Scott’s Prometheus when it came to sections in the Derelict?

CG – We spend some time inside the Derelict.  PROMETHEUS is certainly not ignored.  Beyond that, I wouldn’t want to say.

AvPG – Does your novel feature any of the characters mentioned in the background of Aliens? Such as Lydecker (featured briefly in the Special Edition) or Marachuk mentioned by Bishop?

CG – You’ll see Lydecker but not Marachuk.  Just a function of the plot.

AvPG – How did you prepare for writing River of Pain? Does it differ from the way you would normally prepare for your books?

CG – Well, when I’m preparing to write one of my original novels, I don’t sit down and watch and rewatch a bunch of movies, go online to read the scripts of those movies, print and go through the scripts for small details, etc.  When you’re writing a licensed property, you’ve got to really immerse yourself in the material.  It makes the finished work better but it’s also half the fun of it.

AvPG – Tim Lebbon’s Out of the Shadows and your River of Pain are quite unlike most Alien novels in that they are revisions in the history of the franchise. Does working on these kind of novels present any more pressure when compared to typical tie-in novels?

CG – I honestly don’t think of RIVER OF PAIN as revisionist history.  I haven’t added anything that couldn’t have happened.  To me, that would be revisionist.  That said, the ALIEN franchise has expanded so hugely over the years that the version of the story I’m telling in RIVER OF PAIN is completely logical.  Hopefully the fans will agree.  Most importantly, this was the path Fox wanted the story to travel, and I was thrilled in the sense that it was exactly what I hoped they would want.  Josh Izzo at Fox and I are very simpatico on this stuff.

AvPG – Was there any particular section or character that you enjoyed writing the most?

CG – There are a couple of new characters I loved writing, but I’d prefer to let readers discover those characters for themselves.  Newt, of course, was the biggest draw for me.  Newt’s scenes are some of the best things about ALIENS.  Section-wise…the stuff that takes places inside the Derelict was a pleasure to imagine.

AvPG – As your novel features Colonial Marines and they aren’t mentioned in Aliens, how did you resolve that issue?

CG – Again, it makes complete sense in light of revelations over the decades since ALIENS was released.  Knowing what we know about the Colonial Marines and Weyland-Yutani, their inclusion is entirely logical.

AvPG – It would seem that the Dark Horse comics Fire and Stone and the short comic from Dark Horse Presents tie-in very loosely to your novel. Did you collaborate much with them? Is Derrick Russell featured in your book at all?

CG – Chris Roberson and I talked it out and made sure that our two stories could co-exist.  Yep, you’ll see Derrick Russell, albeit briefly. 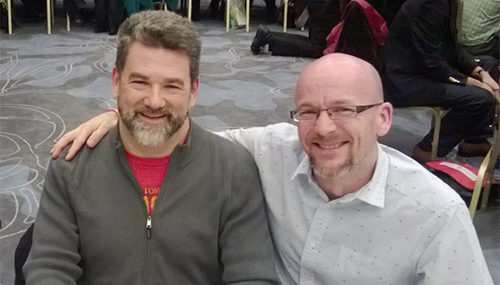 Chris Golden (left) poses with Tim Lebbon. author of Alien – Out of the Shadows and upcoming series from Titan.

AvPG – One of our readers, Albert Price, has asked if your book will also tie into Out of the Shadows or Sea of Sorrows in anyway?

CG – SEA OF SORROWS takes place far into the future, so that’s a no.  But yes, astute readers will pick up a few thinly veiled references to OUT OF THE SHADOWS.

AvPG – Whilst it hasn’t been officially announced, we know Tim Lebbon is going to be working on novels that follow on from Jim Moore’s Sea of Sorrows. Would you be interested in coming back to work with Tim on these novels?

CG – I’d always be interested in working with Tim on anything.  We’ve collaborated on seven previous novels.  But the project you’re referring to—if it exists—would already be under way and wouldn’t involve me.  J

AvPG – Finally, thanks for taking the time out of your day to answer our questions. Before we sign off, is there anything you would like to tell our readers?