In November 2014 a new Alien fan film was announced, Alien: The Adora Files. Set between Alien Isolation and Aliens, Alien: The Adora Files tells the tale of the fate of the starship Adora. I recently had the chance to chat with the enthusiastic man behind the project, German filmmaker Felix Christian Berner. 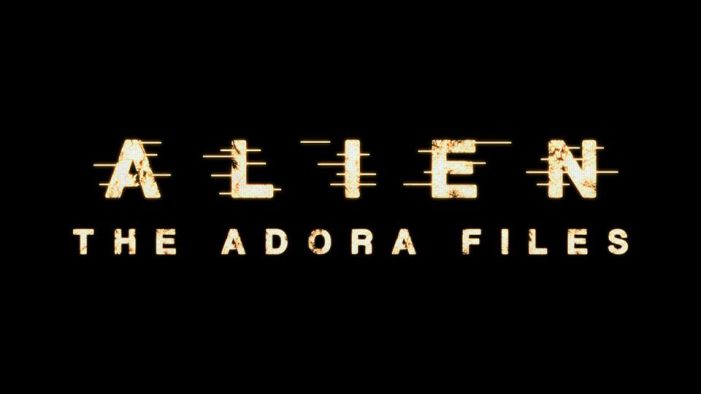 AvPGalaxy – Welcome, Felix! First off, thanks for taking the time to have a chat with us!  Tell us a little about yourself. When did you first get into film making?

Felix Christian Berner – Thank you for having me! I got into film making at the young age of 10. My father gave me a video camera as present for my birthday. From then on I started filming. Most of the time I was creating little action sequences or films of me and a friend of mine as James Bond –  I was a huge James Bond fan as child.

After school I decided to study design and specialized in making short films. I was ever in love with science fiction, ever since I saw Blade Runner and Alien and Aliens. I loved the dark, dirty and dystopic future visions of Scott and Cameron

I was thinking about studying film but I decided to study design because design (communication design) includes all aspects of making movies but you learn more compared to film study – you learn how to design, to style, to use colors.

Parallel to my passion of making short films, I was extremely interested in designing and creating digital artworks – so it was easy for me to combine both interests in one study.

AvPG – How long have you been a CG artist?

FCB – I  was never a CG artist – it was just something I learned by doing – because it is too expensive to hire real CG Artists. I am lucky to have some friends who specialized in CG and who are kind enough to help me out with some stuff like the spaceships in my current movie – Thanks a lot to Dieter Joppich !

The Adora and the rescue ship Protos as designed by Dieter Joppich.

A lot of stuff I was learning just by doing – it is phenomenal that if you grow up with techniques and computers and softwares, you are able to learn it without a teacher – like you can see on the young people of our time with smartphones in the hand from beginning of life.

I grew up in film programs and design software…not sure how I learned all that stuff. When I had a vision to create something, I was never thinking about the “how should I realize it?” – I just did it….maybe it is true and there are talents in each one of us which give us the ability to do amazing things.

AvPG – You are not wrong there! Its so wonderful to be able to teach yourself. Let me rephrase the question – when did you first start teaching yourself to create digital artwork and environments?

FCB – I started learning at the age of 13. I was an anime and manga fan and a fan of Dragon Ball Z. I had the impulse to create an anime website and from then on I started creating digital artwork and websites for myself. I started teaching myself all the stuff I need to know to realize my visions.

In the last years, I was owner and webmaster of many websites from anime pages to Counter Strike clan sites to my own online portfolios.

AvPG – That’s fantastic stuff! Let’s start talking a little bit about Alien. When did your love for the Alien franchise first begin?

FCB – I saw Aliens – I think – when I was 8 years. And Alien a bit later…and there is an amazing evidence online for that – please feel free check out the website and go to the picture folders – there you can see and find a lot of drawings I did as child. I was infected by the Alien movies – I have never felt love so intense with a movie franchise.

I was so in love with the Colonial Marines, that I said as a young German child, that I want to be in the US marines when I am old enough. I was impressed [in Aliens] by the guns and the armour and the marine stuff – and for sure, the Alien drones.

This was my first contact with the dark and dystopic sci-fi worlds I talked about before – followed by watching Blade Runner and all the other master pieces of the 80’s. 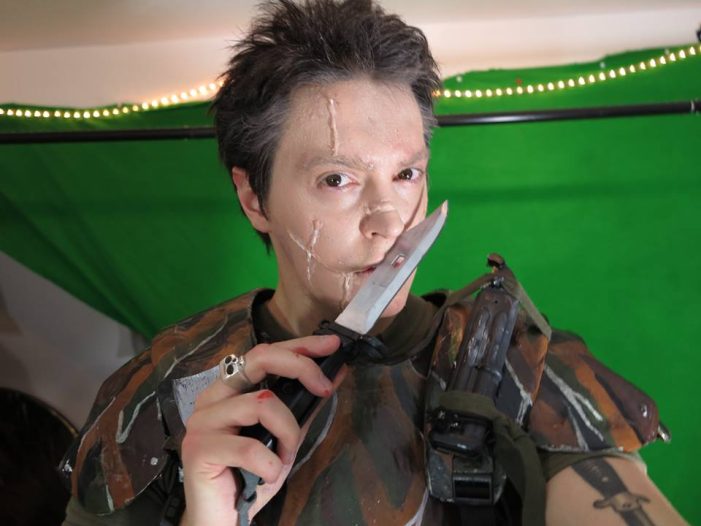 Felix Berner in his own Colonial Marines armor.

AvPG – So it sounds like Aliens is your favourite out of the series? Did that affect the approach you took with the The Adora Files?

FCB – That’s hard to say because I love Alien exactly as much as the action orientated Aliens – also Alien 3 is a wonderful movie. I love all 3 parts because they treat the Alien universe with a lot of love – but to be honest – my fan film is extremely influenced by Alien: Isolation.  My movie is a kind of link between Isolation and Aliens.

The look of my movie is influenced by Aliens – especially the colors and atmosphere but it was not my intention to create a Colonial Marine movie.  It is sad that there aren’t a lot of Alien fan films but there are lots fan films that are showing just Colonial Marine action. No-one was brave enough to work out an Alien fanfilm.

The marines are just a supporting element in my movie – but the main story is dealing with the incident on the USS Adora – a transport ship of the evil company Tyran Industries – not Weyland-Yutani because I think there are more powerful companies out there in the Alien universe and I wanted to show that Weyland-Yutani has a kind of enemy out there in space, a competitor who is trying to beat them.

AvPG – Can you tell us a little about the genesis of Alien: The Adora Files? Where did the idea to do an Alien fanfilm come from?

FCB – All my ideas in my life come suddenly without a thinking about it – not sure when and where the idea came from but for sure I was walking through my city and was listening to music and BAM – the idea was suddenly there, in my brain. Years before I was working on a feature film called Order 76 and created tons of costumes but I was never able to realize that project.

After playing Alien: Isolation I was on fire again and once again obsessed with Alien – I was also really sad about having all these costumes and props stored in my basement without ever using them in a movie and got the idea to use all that movie stuff in an Alien fanfilm – so we could say that my costumes and props gave me the idea for the fan film. 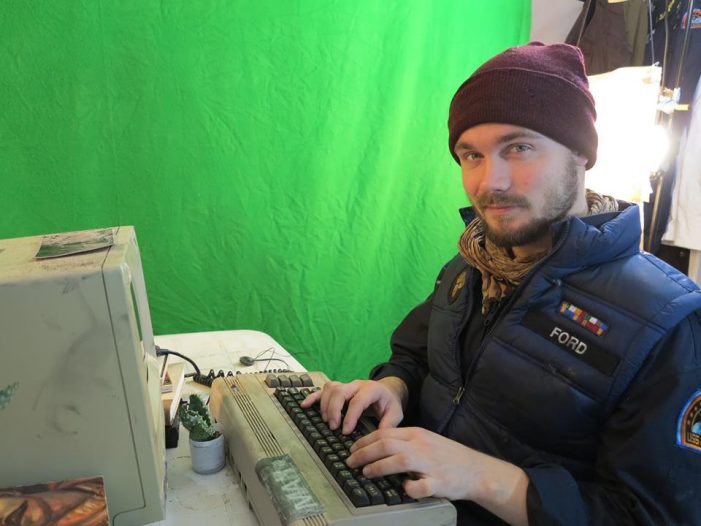 On set with Alien: The Adora File.

AvPG – As I understand it the film is being filmed against green screen with live action props and characters? Why did you take this approach?

FCB – Over many months I designed and produced the costumes, patches, symbols and the complete universe of my film on my own. Then I switched to the role of set designer and built a complete green screen set in my apartment to work after that as director and camera guy; in the end I’m also the editor and CGI/VFX artist. I’m grading the movie and doing the sound design – only the music is done by someone else.  I am a one-man movie machine. haha.

I used my expertise with the green screen keying technique and built an entire set in my apartment! I had used this amazing technique before in some other sci-fi projects and had thought about how to create an amazing look between real footage and CGI backgrounds. It is far too expensive to build complete sets – but if you are able to use CGI, a green screen is all you need. This is cheap but takes months in the post-production.

It is a dream of mine to someday create a sci-fi movie with real, physical sets – but right now – I am really fine with the green screen.

AvPG – So it was a case of using what you’d got? Your CG skills allowed you to make more of your apartment?

FCB – For 4 months I was living in a green screen because I used my own apartment for shooting. This was the cheapest way –this movie cost me lot of money. I really hope the fans will like what I do because I do it for the fans and I am the guy who is paying all the bills.

AvPG – I believe the Alien is also one of the live action elements in the film? Can you tell us a little about the suit and the actor inside it?

FCB – Everything is live action except for the backgrounds and spaceships. The man inside the Alien costume is a friend of mine who is also in love with Aliens and who is the owner of an amazing Alien suit. However, it was hard to make this costume look real – I used tons of soap and shampoo to create the liquid slimy look of the skin and the dropping spittle out of the mouth. I lit the suit in a way that made it look as realistic as possible

AvPG – Are you happy with the Alien suit and the work you’ve been able to do with it?

FCB – Look at this *picture below* so yes– I am really happy.