With the recently released Prey being a significant success for the Hulu and Disney+ streaming platforms, naturally questions have arisen regarding future plans for the franchise.

In a new interview with Variety, longtime series Producer John Davis reminisced on the production history of the franchise up until Prey. Davis elaborated on the about the initial attempt at keeping the nature of the Predator film a secret as well as congratulated Director Dan Trachtenberg on the film.

“Dan came to me and we went to the studio, and it was in the middle of making the other movie. And we decided, ‘Alright, let’s do this, but we’re gonna make it a top secret project.’ So the whole idea was to keep this top secret. The other movie would come out, and then we would announce that we were ready right away to make this. Now, it took a lot longer than right away because different things happened and Fox got sold. It moved over into Disney, and I think it’s great. Disney understood the potential of this franchise.”

“Dan did a terrific job. This movie is his imagination. This movie was his idea. People just need a fresh reinterpretation of this franchise from time to time. And if they have it, it will survive 100 years.”

When asked on the possible future for the franchise, Davis hints at multiple possibilities such as another prequel, a contemporary film, and even a new Alien vs. Predator movie: 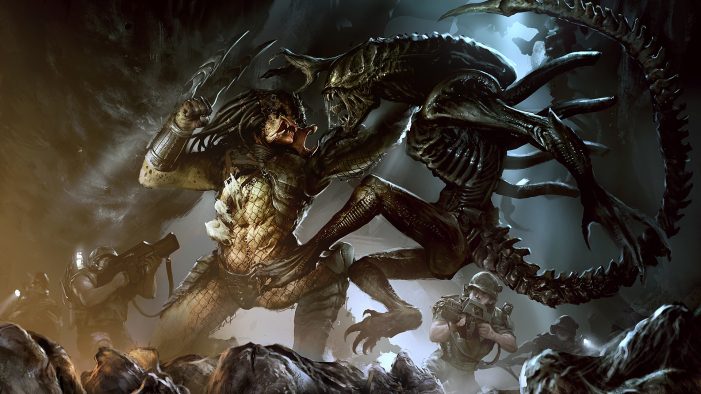 Alien vs. Predator artwork for Prodos Games by Darek Zabrocki

Special Effects Supervisor Alec Gillis also spoke to the possibility of a new AVP film during an interview with ComicBook.com

“I think there’s certainly some good stories that could be told in that world, and it’s not like it hasn’t been done. What excites me about Disney’s involvement in this is what they’ve done with the Star Wars universe, where you can have these standalone side story movies. It expands the universe and expands possibilities. So we’re looking forward to filling in those spaces with cool creatures, cool stories.”

With the last Alien vs. Predator film having released back in 2007, It’s certainly been long enough for us that we’d be plenty hyped to see another AVP film!

Thanks to GreybackElder for the news! Be sure to keep your targets set on Alien vs. Predator Galaxy for all the latest Prey & AVP news! You can also follow us on Facebook, Twitter, Instagram, and YouTube to get the latest on your social media walls. Be sure to join in with fellow Alien and Predator fans on our forums as well!