While Disney’s long history of vaulting its own films in an effort to create artificial demand for those vaulted films is set to come to an end with Disney+, it seems 20th Century Fox classics such as The Fly, The Omen and Alien are now taking the place of the likes of The Lion King and Peter Pan.

A new report from Vulture explains that requests to screen some classic Fox films are being refused, with the simple explanation from a Fox booking agent that they could “no longer book repertory titles.” Vulture explains that it seems the decision is aimed at cinemas that profit from distributing older titles alongside new ones, where non-profit organisations will still be able to show them:

Disney officially declined to comment for this piece, but a film distributor with firsthand knowledge of the company’s policy says it is directed at theaters that screen first-run Disney and Fox content alongside older titles. The distributor said that screenings of vintage Fox films would still be allowed at nonprofit theaters such as Film Forum in New York and Segundo’s Old Town Music Hall, and in some other venues, including outdoor screenings in public spaces and at museums and cultural institutions (particularly ones dedicated to cinema, such as the Museum of the Moving Image in Astoria, New York, and the Gene Siskel Film Center in Chicago). 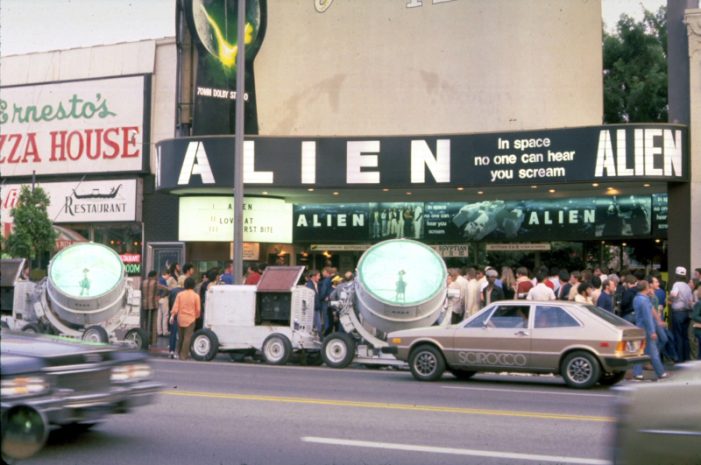 Queues outside the Egyptian Theatre on Alien’s opening day on May 23rd 1979.

Something to note is that the Vulture reports that each request is actually judged on a case-by-case basis, with exceptions for things such as anniversaries:

And there might be some exemptions granted for special occasions such as anniversaries. But each instance would be considered on a case-by-case basis, with no guarantee that the decision will go the theater’s way, no matter what Fox films it had been able to wrangle a week, a month, or a year earlier.

Relating specifically to this news and Alien, the article also provides an example of how Disney’s vaulting policy has already stopped a screening of Alien:

In August, Rachel Fox, the senior programmer for the Rio Theater near Vancouver, tried to book the original Alien to play alongside the upcoming Alien making-of documentary, Memory: The Origins of Alien. Disney told her that the title was unavailable, even though Alien has had one-off screenings in theaters all over North America throughout 2019, the movie’s 40th anniversary year, and is being shown via satellite in hundreds of theaters by Fathom Events this month.

From the perspective of an Alien and Predator fan, where I believe this may impact us most is in smaller cinemas such as The Prince Charles Cinema (I pick on this solely because I’ve been to showings there several times) in England that frequently run the older films. I expect it’s likely we’ll still see screenings for larger events such as Alien Day or this year’s 40th anniversary of Alien. But that is just supposition on my part.

Make sure you keep checking in with Alien vs. Predator Galaxy for the latest on all things Alien! You can follow us on Facebook, Twitter, Instagram and YouTube to get the latest on your social media walls. You can also join in with fellow Alien and Predator fans on our forums!