NECA Aliens Series 8 has been unveiled on NECA’s website. The 8th series is themed around Alien 3 and as such features 2 varients of the Dog Alien and 2 very firsts for NECA:

“Series 8 focuses on 1992’s Alien 3, and includes Weyland Yutani Commando, Dog Alien, and the first Ripley figure from this movie to feature the likeness of Sigourney Weaver. Ripley in Prisoner Uniform comes with removable jacket, 2 sets of arms, and flashlight & torch accessories. Weyland Yutani Commando comes with removable goggles, custom pulse rifle, and knife that fits in a boot sheath. The Dog Alien comes in brown and gray variants, with over 30 points of articulation and bendable tail. 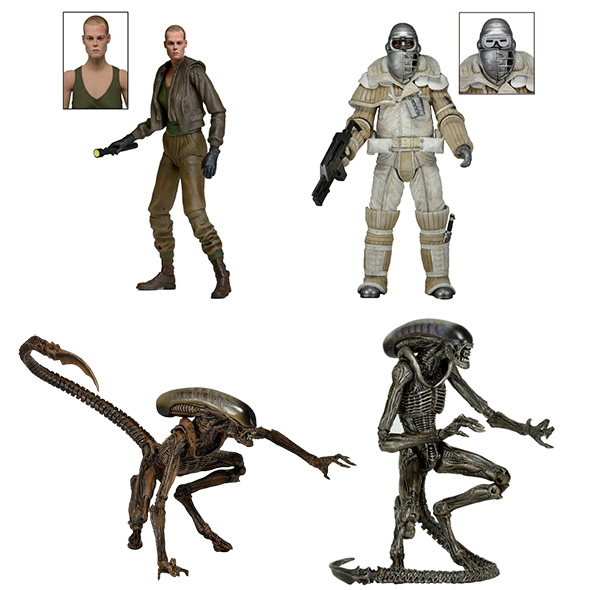 NECA Aliens Series 8 has been unveiled on NECA’s website.

NECA Aliens Series 8 is due for release in June 2016. Alongside the Alien 3 themed series, NECA will also be releasing a “creature pack” that includes the Queen face-hugger previously teased on Twitter, a large scale Queen chestburster and face-hugger in statis tube.

In addition to Series 8, NECA also announced their next 1/4 scale figure to go alongside their recently released Alien (if you haven’t already, check out our review of the 1/4 scale Alien). This time around we have a 1/4 Aliens Warrior!

“Celebrate the 30th anniversary of Aliens with a new 1/4 scale figure from the thrilling 1986 follow-up to the legendary horror film. This is the first appearance of the 1986 Warrior in our 1/4 scale line!

The menacing Warrior stands over 22” tall, and has a hinged jaw that opens, revealing an inner mouth that extends for realistic movie action. It has almost 30 points of articulation, including double knee joints and a bendable tail, and is movie-accurate, down to the bluish tint that actually came from the lighting used in the film to heighten the cold, alien nature of these creatures.”

NECA are currently in attendance at Toy Fair 2016 where they are showing off the figures above. They’re also showing off the upcoming Predator series 16 (a Kenner inspired wave) although they have not officially announced them yet. ToyArk are currently at the event and have posted up a lovely gallery of NECA’s display (as well as their Cinemachines display which is heavily Alien and Aliens themed). Be sure to check them out!