NECA has just released some official pictures of its upcoming Wolf figure, both masked and unmasked versions: 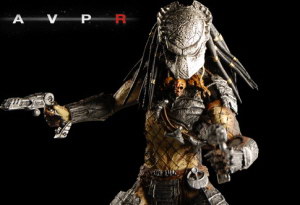 “The Predator’s trademark shoulder-mounted Plasma Cannons are jointed, can swivel and pivot up and down, and be folded back when not in use. And just like in AVP: Requiem, they can be removed from the shoulders and used as hand-held guns with attaching battery packs! The interchangeable left hand allows the Predator to hold two weapons at once, and his right hand features retractable blades! All weapons are interchangeable between both the Masked and Unmasked figures.”You can find more pictures on NECA’s website. I expect we’ll be sent some higher resolution ones soon. Thanks to Sabres21768 for the news.